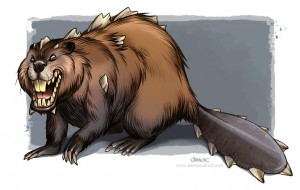 Sometimes, Kobold Quarterly does silly things. This time, it’s Darren Calvert‘s fault. Well, his fault and also Canada‘s fault. Because it’s important to blame celebrate Canada on certain occasions, such as July 1, which is Canada Day.

“This actually came out of the campaign I’m playing in… We spoke to an NPC who asked us to investigate what’s causing local farmland to flood. My first thought was dire beavers,” says artist Darren Calvert. “Our party is already dreaming of acquiring dire beaver mounts to ride into battle…”

Behold, mere mortals, the dire beaver, with complete stats for your game. Because really, how can you resist it?

The stats are from a quick contest run among the patrons of the current Open Design projects on 48 hours notice. With about a half-dozen entries split among multiple groups of patrons, it was a strong-toothed field of contenders, and not taken too seriously. The various patron groups for Tales of the Old Margreve and Glories of the North critiqued the critters as they were posted. Is a beaver’s skill a Craft at building dams, or a Knowledge (engineering) skill? We could have argued for days. Fortunately the deadline was tight.

The urbanites of Streets of Zobeck mostly stayed above the fray. Too pastoral for them, I suspect.

Submissions included a clean 4E set of stats that was elegant in its simplicity, a much more involved Pathfinder version included animal companion stats AND the Latin name (either steortodon or trogontherium, for those scoring at home). Another version featured the thundering tail slap and the bleed ability—those teeth dig deep!—and one featured armor gnawing, ice walking, and a summary of their pelts for armor value.

One more described their lodges as “walled keeps with miles of tunnels,” which I fully approve, and also covered the alchemical uses of castoreum (aka, beaver musk oil). They were all crazed with beaver fever, and frankly, I am tempted to compile all the entries into a madcap PDF, or better still, ask Scott to do it. They all brought something to the table.

In the end, though, I chose based on the crazy powers of the entbane variety of dire beaver. Congrats to our winner, Endzeitgeist! Get in touch with us by email to claim your prize, which may be sent to you with a few wood chips just for flavor.

Ecology
Environment any temperate or tropical with large bodies of water
Organization solitary, pair, or family (2 adults and 1d4 kits)
Treasure incidental (nothing wooden, though)

Special Abilities
Cleave Trees (Ex) A dire beaver always does double damage against trees and tree-like creatures and ignores their hardness or DR (e.g. treants). Dire beavers are always treated as having the Cleave feat against wooden opponents and trees.

Hold Breath (Ex) A dire beaver can hold its breath for a number of rounds equal to four times its Constitution score before it risks drowning or suffocating.

Spit Splinters (Ex) Once every 8 hours, with enough wood, a dire beaver may opt to explosively regurgitate a mesh of splinters and acid in a 15-foot cone originating from its mouth. Creatures caught in the acidic vomit take 2d4 piercing damage from the splinters and 2d4 acid damage (Reflex DC 13 halves). Once a dire beaver has used this ability, it gets really hungry and can’t use it again until it has both eaten a fish meal and chomped on enough wood to replenish the splinters. This save is Constitution-based.

Ecology
Among the predators of the forests, rivers and lakes, the dire beaver is an oddity: while not the strongest or smartest creature around, most creatures that once have gotten the acidic, burning and splinter-laden spittle of the dire beaver hurled at their snouts steer clear of these architects of the water-front.

Although they are highly territorial when it comes to intruders or protecting their kits and will fight to the death with their razor-sharp teeth, they also have been known to be playful creatures that can be bribed with the right food to allow people to cross their sturdy, beautiful dams.

Dire beavers love wood containing magical energies. Be it wands (even the residue in recently emptied ones), magical plant creatures, or enchanted quarterstaffs—throw one at the creature and it will (usually) leave you in peace while it gnaws on the delicious morsel.

The lairs of dire beavers contain their kit and is hidden inside their elaborately crafted dam, accessible only via the water and by maneuvering through the confusing, twisting tunnels inside the dam. The nest often contains, gems, pieces of gold and crystals, the remnants of discarded wands the creature has found and eaten. Almost every couple with kits also seems to have a piece of Ironwood in their nest for their kits to chew on.

Legends
◊ It is said that every 100 years, several families of dire beavers travel for miles on end, leaving their territory and following a strange call. They form a huge hunting pack to take down a treant. Whether this is true and done according to a treant’s dying wishes or something different altogether, remains to be seen.

◊ A school of gnome scholars and progressive architects considers dire beaver dams the epitome of natural craftsmanship and seeks to emulate their sturdy constructions. They are currently looking for bodyguards for an excursion and dive into a particularly huge dam in the Old Margreve.

Congrats to the patrons who designed their takes on this creature, and our thanks to Darren Calvert for dreaming it up and illustrating it! And Happy Canada Day!

15 thoughts on “Our Dire and Native Beaver”