Skip to content
Home / Delve into the Depths in the Kobold Blog / Grimalkin: A New Adventure for Pathfinder Roleplaying Game 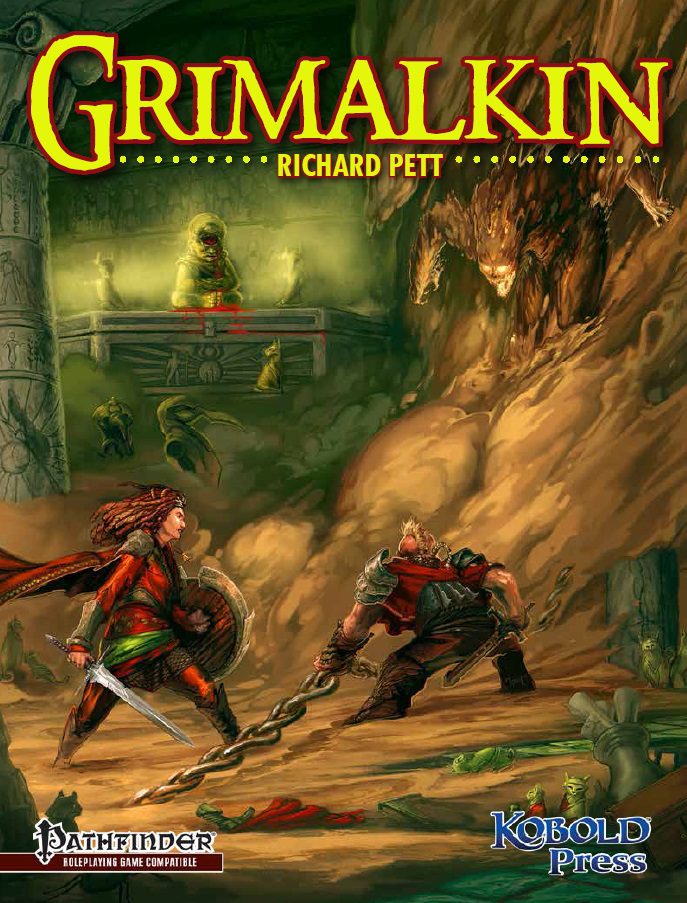 Lo! The corpse of poor, departed Scholar Zubayr, washed up on the shores of the River of Sand, lies in the charnel house… destined to become dinner for a cult of cannibals. Though distasteful in the extreme, this isn’t your concern—except that Princess Karima Gamila, the most beautiful gnoll in Per-Bastet, has begged you to rescue her friend’s body and help discover his fate.

Still unmoved to action? Know then, adventurer, that the Scholar was hot on the trail of lost treasure! If you can claim his body from the cult and decipher the clues he left behind, long-buried riches and powerful magic might be yours.

But nothing is simple in this city of dark wonders: others converge on the charnel house in pursuit of wealth, vengeance, or both. Can you out-fight and outwit vile cultists, undead catfolk, a cunning werecrocodile gnoll, and the deadly secrets that lie buried beneath the River of Sand?

Grimalkin is an adventure for 3rd to 5th level characters and compatible with the Pathfinder Roleplaying Game. Set in the city of Per-Bastet in the Southlands Campaign Setting, it is meant for play either as the thrilling sequel to Cat and Mouse, or as a standalone treasure hunt!

This is a Southlands adventure from that grim scribe himself, Richard Pett. Grimalkin is available now.

(A poster map of the city of Per-Bastet is also available via DriveThruCards.)