Skip to content
Home / Delve into the Depths in the Kobold Blog / Behind the Curtain: Maps with Jonathan Roberts 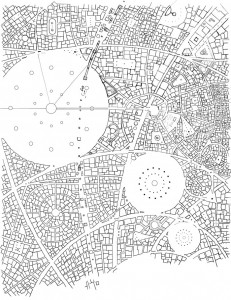 Jonathan Roberts has done some amazing cartography for Sunken Empires—you saw a preview of his work a few weeks ago. Wonderfully, he answered a few of our questions and discusses how it all took shape…

KQ: How did you go about mapping a city built over ruins, and half-sunken?

JR: The art brief for cassedega was wonderfully comprehensive. I was given 5 pages of description with images of Herculaneum and Pompeii as well as previous maps for inspiration. The style of the ruins represents a great fallen city with technology far beyond the current norm. I was encouraged to build in spiral designs and shapes based on the golden ratio. On top of those ruins are two halves of modern day Cassedega—one above the water and one below. For these cities, the brief was a bit looser with a list of interesting locations that should be somewhere on the map.

To create a convincing map, I first created a detailed sketch of the ancient city of Ankeshel. I used a lot of spirals, concentric circles related by the golden ratio, golden triangles, and as many geometric shapes as I could. I built in an aqueduct and tried to make sure that, even when it was ruined, some of those patterns would be clear and obvious, such as the spiral canals and the counter spiraling domed hills.

Once the city was laid out, I designed a means of automatically reducing the whole city to rubble using some custom brushes in photoshop. That was a lot of fun and so much faster than drawing every last fallen rock. I built in the cracks from the tectonic shifts that sank the city and raised it again and figured out where the water line would be.

With the city well and truly destroyed I went back in to place the current cities of Cassedega. I was more careful here, using some of the old structures as guides for the current cities—after all, if you had a ruined city, there’s a logic to using some of the walls and foundations that are already there—and placed other buildings in new-build districts. Once those were in place, it was really just a matter of clearly labeling the locations of interest.

What unexpected challenges did you run into with this map?

It took a bit of work to work out how to take a city map and ruin it. I also needed to find a balance between seeing the patterns and structures of the ruins without the detail, making it impossible to see the shape of the current city. I hope that all of the work in the design of the old city provides enough background texture to draw the eye in and really hook the viewer without overwhelming the real map.

The other challenge was that this was initially commissioned as a black and white map and then turned into a colour map for the pdf version of the sourcebook. Details that work in one don’t necessarily work in another, so you’ll notice that there are some changes between the two versions, particularly in the sea.

Do you think about how inhabitants use a city, or do you mostly consider the overall look of the map when you’re doing a piece like this?

We’re in the business of helping people suspend their disbelief. If a map shows something that’s not functional, then people are going to have a hard time suspending their disbelief. The one thing I never want to happen is for a player to look at a map and ask “but why is that there?” and for the GM to have to answer “I don’t know, perhaps it’s a mistake in the map”.

A city map is no different. In this case I considered how people moved around and traded. I placed a dock right at the edge of the deep water drop, so ships with a deep draught had somewhere to dock. I placed shallow docks away from the underwater city so that surface traffic wouldn’t be skimming over the roofs of the merfolk. The floating market lies on the edge of both cities so that it truly acts as neutral ground. I made sure that richer areas had more space and poorer areas had smaller, more clustered buildings. Even though the different quarters aren’t explicitly listed, the visual cues and the specific locations should allow a GM to say, “this is the merchant quarter, these are the rich estates, this is the poor waterfront district”. My hope is that the layout gives a viewer the impression that this is a real working city—even though it’s a city built half on and half under the sea on top of the ruins of an ancient civilization.

In the case of the ruins of Ankeshel, I didn’t worry too much about all the roles of the different housing areas since we’re only seeing the ruins of one sector of the city, and that city is already alien and unusual. In a sense it’s a good thing if the players look at those ruins and ask “why?”

10 thoughts on “Behind the Curtain: Maps with Jonathan Roberts”