Skip to content
Home / Delve into the Depths in the Kobold Blog / Midgard Notebook: March of History 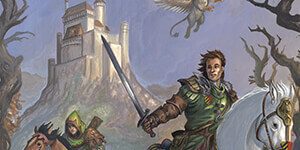 There’s a sense in some fantasy campaign settings of being entirely encased in amber, and with good reason: players want the world to remain familiar and useful for play. Removing dragons from Dragonlance or advancing a timeline 100 years in a world of your own invention without consulting your game group… well, you would be taking rather a big chance. Change can be a dirty world in the relatively serene halls of fantasy worldbuilding. No one likes a jarring upset of an enjoyable apple cart.

At the same time, Midgard’s original design went out of its way to stack up conflicts, arrange ley lines to judder and rasp against one another, prepare armies to march and burn. The potential for risk and disaster was a real part of the appeal of the original setting 5 years ago. And it seems both foolish and unfair to pretend that those kingdoms and disasters are going to remain just… about… to… topple—but not quite!—for ever more. The place was built to explode. Revising it means that some questions rise to the surface.

Ten Years Under the Mountain

So the designers have taken a middle ground with respect to the chronology and timeline. The revised Midgard Campaign Setting moves the needle 10 years into the future. Young Prince Loki in the halls of the Adelian Palace has grown up into a young man: What does this mean for his claim to the throne in the shadow of an overbearing regent? The armies of the Dragon Empire have marched and plundered without cease for decade after decade with only occasional rebukes, such as their misguided attempt to seize territory from the Nurian god-kings. Where have their armies gone in ten years under the rule of the Sultana? Have they suffered any great defeats or conquered great new territories? (Possibly both!)

Elsewhere, have goblin tribes found anything to unite themselves in the Wasted West? Surely, the priests of the Black Goat of the Woods might find fertile ground in the charred stones of the magocracy, sharing the Goat’s milk and succor with those who live on little hope but the dream of conquering a dwarven hall or burning down a green forest… and what has the Master of Demon Mountain done in a few years of scheming and grand experimentations?

Charms of a Small and Busy Town

While great tribes and dark gods are always able to shake the levers of the world, even small realms change in interesting ways. Surely, every Midgard player knows that the shadow fey returned to Zobeck and asserted their claim to the place. Heroes made sure that claim was not uncontested, but… even a free city on a small but vital river may have changed a bit in a decade. It hasn’t change much—at its heart, Zobeck is still a regional power at best, a mercantile place built on silver, tin, and relentless devotion to a strange goddess and a ghetto full of hardworking kobolds. But it has changed a little bit.

What I am saying is that worlds become more interesting over time with the work of many minds and rich veins of gameplay, daydreams, outrageous characters streaking across the sky, and strange new lands and their ambassadors. It would be a shame, I think, to change Midgard into something so different that no one can say “Oh, I really don’t know the setting anymore.” At the same time, it would be an even greater shame to pretend that Midgard hasn’t changed at all. Like a child growing into an adult, it has become more like itself: its heroes and villains, its uniquely weird magic and dark overtones are so much easier to see with the benefit of five years hindsight and five years further game play than they were in the early days of publishing Midgard adventures and source books.

Under the Leaves and Branches

I feel confident you’ll recognize the place, and at the same time, I hope that the other designers and I surprise you more than once with the world it has grown into. The branches of the world tree Yggdrasil are exactly the same, but the shadows you find under its leaves are ever shifting. Thanks for taking the journey to the mortal world and seeing what strange new delights the world holds in store. I cannot wait to start sharing them with you, as the Midgard: Dark Roads & Deep Magic Kickstarter wraps up at noon on Friday, February 24.

DESIGNER PROMISE: First seven comments or questions here get a reply direct from me and my new friend Ratatosk. Bring seeds and nuts.