Skip to content
Home / Delve into the Depths in the Kobold Blog / Grim Games: The Two Travellers 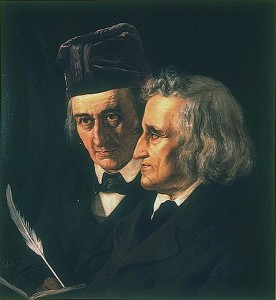 The Brothers Grimm were two traveling brothers who collected and documented the many folk tales of their time and region, collecting over two hundred tales, each one with variations to further expand the material they compiled. Since then we have had several of the tales immortalized in pop culture, such as Cinderella and Snow White, but the stories we commonly know of today are not quite the ones told by the storytelling brothers. Many of the tales have a dark side, with murder, cannibalism, and gore alongside the familiar talking animals and fairy godmothers.

One story that isn’t nearly as dark as others but holds many fun elements is titled “The Two Travellers.” This is a tale of two men, a tailor and a cobbler, who are traveling together as they seek their fortune in a far off land. The tailor is a good man who is optimistic and likable, while the cobbler is a sour man who is quick to anger and seeks to harm the tailor several times. This story has talking dead men, magical dew, and animals that reward those who help them. In the end, in typical Grimm fashion, the tailor marries a princess and the cobbler is horribly punished.

What is great about Grimm tales is that they have so many wonderful elements that we can pull into games. In “The Two Travellers,” we could use the characters, even the animals, as nonplayer characters, we could use locations like the forest to challenge the player characters, and we could even take items from the story and place them into a game as a reward. Imagine having an NPC that is a cruel as the cobbler and demands an eye of a player character for assistance, or having items that are normally trivial suddenly become vital. These NPCs don’t need to be human either, and one could easily be a fey creature in the guise of a humble cobbler. Finding discovering a way to retrieve a crown, as happens in the story, could be a worthy quest, especially if the lake it fell into is enchanted to prevent everyone but animals from retrieving items lost to it.

The most unusual location and element of this story is the gallows where the hanging dead talk and where the living either find or lose their sight. We have something that works great as both a memorable location and an interesting encounter. This is something best placed in an area where the party has to rest while on a journey, possibly about a day away from a city along a roadside. Here the dead are restless but not quite undead threats, and at night they whisper secrets they learned by watching the world around them. Meanwhile, the murder of ravens that roosts on and around the gallows grows angry at passersby and attacks them from time to time.

We can present this in a couple of ways. The first is to place a gallows with two dead men dangling from it, and at night it takes a Perception check to overhear them talking harmlessly about various things. You could have them give out secrets and plot hooks, like the location of a lost treasure or the healing properties of the dew in the full moonlight. For the ravens, you can simply place a murder of crows there as a combat encounter. The other way is to make this a haunt that could be harmful during the day but beneficial during the night.

Placed by the roadside, these gallows sit in a great spot for a camp. Two bodies swing from ropes high above travelers, their bony bodies still clothed in torn rags. Resting on the beam of the gallows are ravens, who stare at passersby with red, malicious eyes. The ground around the gallows is soft and covered in short grass, making it a good place to set up camp.

What the haunt does depends on the time of day. If someone rests by the gallows during the day for more than an hour, a murder of ravens swoops down from the gallows and attacks them. This is much like a swarm of ravens, and thus those in the area take 2d6 damage and must make a DC 13 Reflex save or be blinded. The blindness lasts for 1d4 days or until healed with remove blindness/deafness. During the night, the haunt is harmless and anyone who rests there may make a Perception check to overhear the hanging men talking. The corpses notably talk about how the blind may wash their eyes with the dew in the area and have their sight restored. If someone does this, they will be affected by the spell remove blindness/deafness.

Taking down the two hanging men at night, washing their eye sockets with the dew that glistens in that area, and burying their bodies in proper graves will quiet this haunt forever.

You can read “The Two Travellers” online to learn more about this story.