Skip to content
Home / Delve into the Depths in the Kobold Blog / Freya, Goddess of Love and Beauty 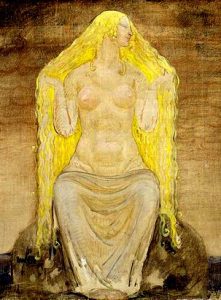 Refill your flagons! Jarrod Camiré continues to bring you new material to use with Northlands: Roleplaying in Winter’s Chill. The third of four parts, this week we learn a little more about Freya.

In Norse mythology, Freya is the goddess of love, beauty, fertility, gold, seiðr, war, and death. She is the one who leads the Valkyries. Freya owns many fabulous objects and some fantastic animals, including the necklace Brísingamen (a unique piece of jewelry made from gold and silver that shines likes a liquid flame), a chariot driven by two cats, the boar Hildisvníi (which Freya rides when not using her chariot), and a feathered cloak that enables her to shapeshift into a falcon.

Although half of those who die in battle go to Valhalla and Odin, the other half is for Freya, who receives such valorous warriors in Fólkvangr, the Field of the Host in Asgard. This is where her hall Sessrúmnir is located. It is mostly from this place that she assists the other gods, often by allowing them to use her falcon-feathered cloak…

When her husband Odin is away, she cries tears of red gold. When such tears fall upon the trees of Midgard, they are transmuted into amber. The goddess searches for Odin under assumed names while she travels the Nine Worlds.

• Mardöll, Mardoll, or Marþoll: “Sea-brightener,” “The One Shining over the Sea,” or “The One who Makes the Sea Swell”

Other forms of her name are Frea, Fraying, and Ereyja.

In poetry, she has been referred to as The Daughter of Njordr, Sister of Freyr, Wife of Odr, Mother of Hnoss, Possessor of the Slain, of the Gib-Cats, of Brísingamen; Goddess of the Vanir, Lady of the Vanir, Goddess Beautiful in Tears, and Goddess of Love.

Freya is also known as The Fair One, The Seer, The Great Goddess, The Sage, Freyja of the Black Swordhand, and The Queen of the Valkyries.

4 thoughts on “Freya, Goddess of Love and Beauty”