Skip to content
Home / Delve into the Depths in the Kobold Blog / Howling Tower: Lure of the Unknown 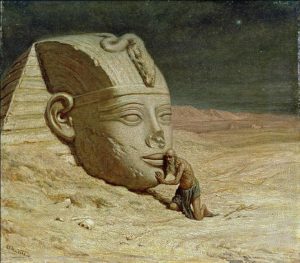 “The unknown” has a hypnotic lure. If you’re anything like me, then you started exploring the dark recesses of the closet the moment you were old enough to switch on a flashlight. After the closet came the basement, the attic, the garage, neighbors’ yards, the woods down the hill, and eventually the storm drains that carry runoff hundreds of yards beneath the streets through pitch black, echoing concrete pipes the perfect size for a 10-year-old to crouch in.

A world without secrets is a world that doesn’t need adventurers. It might need heroes to save it from some catastrophe or looming evil, but it doesn’t need explorers willing to strike out into the darkness with no guarantee that they’ll make it back home to the light or investigators driven to peel back layers of concealment and deceit from ancient horrors or modern crimes.

Let’s look briefly at three types of secrets that can be buried in a campaign: geographical, historical, and magical.

Geographical mysteries are the most straightforward. Most of them can be expressed with questions as simple as “what’s on the other side of those hills?” A points-of-light setting—which is often just another way of presenting a post-apocalyptic setting—has a big advantage in this regard, because the whole world is a blank sheet. At the beginning of the campaign, neither the players nor the characters may have any reliable information about the world more than a mile from their doorsteps. Just learning what’s out there will play a large role in this type of campaign. Filling in the blank spaces on the map is an end in itself.

There aren’t many places on the surface of our planet Earth where people haven’t gone, but there are plenty that have been visited only a few times because they are so difficult to reach. If you can get there only by walking—or worse, only by walking behind someone who is cutting a path with a machete—then the odds are high that few people have gone there. The deep jungles and rainforests of South America and New Guinea almost certainly still hide a few tribal societies that have never had contact with the larger world.

If you’re likely to die in a place without special gear, that’s another big discouragement.

But the best geographical mysteries are those with a larger-than-life aspect. It’s tough to go wrong with classics like Atlantis, El Dorado, inaccessible tropical valleys stalked by dinosaurs, chasms that could comfortably house the Grand Canyon, and steaming entrances to the underworld.

Historical mysteries are secrets from the past that have been forgotten or concealed until they disappeared from living memory. The only record now lies hidden in misplaced tomes of lore or a city in ruins. The answer exists; the ancients knew it, but we’ve forgotten. These types of secrets are especially prevalent in post-apocalyptic settings, where so much of the past was out-and-out destroyed. Whether you need to uncover the identity of the true heir to the throne, the key to deciphering Rongorongo, the purpose of the thousands of stone men that line the crests of the hills, or the reason why the next valley glows blue in the moonlight, someone in the past must have left a clue somewhere.

Magical mysteries aren’t simply questions like “how does magic work,” although that question could drive a lot of adventure in an RPG. The secrets of the gods are magical mysteries. So are the existence, function, and location of magical artifacts like the Fountain of Youth or crystal skulls, the Nazca Lines, or the alignment of the pyramids. Yes, we think we’ve cracked those enigmas now, but we were awfully puzzled for a long time.

When thinking about setting design for an RPG, you can forget the rule concerning Chekhov’s gun. The more mysteries you hang above the mantle in Act 1, the better, even if most of them are still uninvestigated in Act 3. Such riddles are adventure bait of the highest order. You can’t offer too much.

3 thoughts on “Howling Tower: Lure of the Unknown”