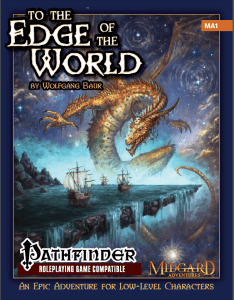 The flat world of Midgard sits in the center of a vast ethereal ocean called the Celestial Sea. Dizzying wonders and unspeakable terrors await those travelers with the bravery and means to take a leap past Veles the World Serpent and into the starry void. From visiting other worlds barely visible in the night sky to making an ally of a gregarious living star to avoiding the attention of a dreaded void dragon, the Celestial Sea is a realm rich with potential for adventure. Beginning at the Star Citadel (from To the Edge of the World), this series will explore several of the exotic magical traditions native to the Celestial Sea, as well as some of the beings and locations with which they are associated.

Few travelers are not awestruck by their first view of the Star Citadel, an enormous fortress in the shape of a six-pointed star, drifting calmly through the void. The citadel bustles with creatures both strange and familiar, most in the service of King Ioratas and Queen Astrakia, the King and Queen of Stars. Although the citadel has many wonders that visitors are free to explore, its catacombs are decidedly not among those. Far larger and deeper than the structure’s geometry would suggest, the catacombs are home to beings that the King and Queen prefer kept secret, some of their own volition and some not. Of all those in the former category, the Ether Mages have the greatest presence in the citadel proper. Led by a wizened half-angel under the influence of a permanent blink spell, the Ether Mages are a collective of wizards retained by the King and Queen to plumb the depths of ethereal magic. While the King would have their research kept secret for his own reasons, the mages themselves are generally gregarious scholars and surprisingly unguarded about discussing their work with wizardly visitors. As such, bits of their exotic ether magic have crossed the Celestial Sea, even turning up in Midgard.

As elementalists, ether mages focus much of their study on the ghostly substrate of the Celestial Sea, in addition to modes of travel between the Material Plane and larger Ethereal Plane. Clever applications of these two threads of research have also given ether mages unique insights into invisibility, force manipulation, and all manner of instantaneous travel.

A wizard of the ether school gains several school powers as well as an extra spell slot for each level of spell he or she can cast. This spell slot must be used to prepare a spell from the ether spell list below.

Add the following spells to your spell list at the listed spell level:

Phase Casting (Su): At 15th level, the effects of abjuration and force spells you cast from the Ethereal Plane extend into the Material Plane.

Ethereal Dispatch
School transmutation; Level sorcerer/wizard 7, summoner 5
CASTING
Casting Time 1 standard action
Components V
EFFECT
Range close (25 ft. + 5 ft./2 levels)
Target one creature
Duration 1 min./level
Saving Throw Will negates; Spell Resistance yes
DESCRIPTION
You banish the target to the Ethereal Plane. Consult ethereal jaunt for details on ethereal movement and interactivity with the Material Plane. Creatures with special abilities permitting them to move freely between the Ethereal and Material Planes are confined to the Ethereal Plane for the duration of the spell. A banished target may use ethereal jaunt to return to the Material Plane before the spell’s duration is finished.

Phase Hammer
School transmutation; Level sorcerer/wizard 5
CASTING
Casting Time 1 standard action
Components V
EFFECT
Range touch
Target one melee weapon
Duration 1 round/level
DESCRIPTION
This spell causes a weapon to rapidly shift back and forth between the Material and Ethereal Planes in the same fashion as blink. When attacking with this weapon, reduce all AC bonuses due to armor or shields by half (rounding reduction up). On a critical hit, the weapon has briefly rematerialized inside the target—add one additional die of damage and 1d4 bleed damage.

To learn more about Midgard and the Star Citadel, consult the Midgard Campaign Setting and To the Edge of the World.