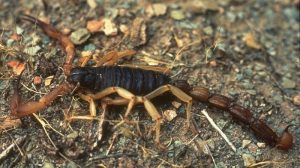 In the old days, giant killer scorpions didn’t throw lightning bolts and fireballs. They had to rely merely on bone-snapping pincers and flesh-melting venom. Pine for those simpler days of bloodshed no more!

A giant scorpion stays hidden to surprise foes. It attacks using double attack. It devours grabbed enemies. It tail lashes ungrabbed enemies to knock them away. It uses an action point to sting those in range.

Generally, it tries to grab and immobilize as many foes as possible, and it uses its tail lash to push enemies back and subject them to its sting when they move into its threatening reach again. If it can immobilize all of its enemies, it will grab one and carry it away from the others to try and finish it off and devour it. It uses its snatch and devour powers whenever they recharge. When it falls to 35 hp, it retreats to find a place to hide.

[M] Snatch (immediate interrupt, when scorpion is target by melee attack; recharge on 6)
+7 vs. Reflex; the attack is lost, and the scorpion snatches the enemy’s melee weapon with a claw, dropping it in any square adjacent to the giant scorpion