Skip to content
Home / Delve into the Depths in the Kobold Blog / Getting There: Alternative Transportation

Non-magical transportation in our fantasy RPGs is most likely by horse or horse-drawn cart. This makes it difficult to cover more than 30 miles in a day. Such a limitation may slow an adventuring party seeking far-off destinations, hinder industrial operations like mining or lumber harvest, or present a strategic weakness for a kingdom. There are ample reasons for a world to include a mode of transportation beyond traditional tamped earth or stone roadways. Such new modes can be as simple as a canal network or as complex as a railroad. 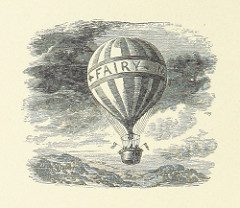 Rubberized-silk can hold gases and be used to lift a tethered load or be freed to follow the winds. Should this technology be included in your world, balloons can be ceremonial, such as for lifting imperial banners into the sunny breezes; practical, to carry cargo or people over an impassable ravine; or deadly, like dropping weapons onto the battlefield below. However, balloons can be punctured, exposing occupants or wares to the ills of falling. Balloons can engage in aerial melee too—with one township known to have employed several to combat a dragon by dangling hooked lines that tangled and restricted the beast’s flight.

Leaping over valleys and great rifts, aerial ropeways (cable cars) are especially advantageous in difficult terrain. Though expensive and complex, ropeways cover distances directly, free of the meandering riverbeds and valley floors preferred by road builders. Such systems have been used to move entire armies and mountains of silver and gold and require timber towers to support two ropes, one to carry the slung cargo or passenger carriers and the other to pull them. Because weight is spread over the entire system, each carrier can carry heavy loads. Curve stations, whereby carriers temporarily leave the carrying rope for curved rails, take the ropeway beyond linear courses, though add substantial cost to a system. Most aerial ropeways terminate at ports or are used in cities to bypass dense foot or cart traffic and are powered by large water wheels or great beasts. Aerial ropeways require constant maintenance and frequent replacement of fiber and leather ropes as, when climates are wet or freezing, these ropes tend to quickly decay. Metal chain or twisted wire ropeways are rare due to cost and technological limitations, though are more robust.

Railways are also rare as they are extremely expensive and difficult to defend. However, there are applications for smaller systems, especially in industry. These systems are usually made of wood (including the rails) and are likely horse-drawn. However, some advanced societies employ steam or magic for propulsion. Scholars have noted the employment of iron rails in some railroads, often by dwarves as a part of their mining operations. One such system provides transport to gem miners and their equipment through a network of ancient lava tubes. Utilizing water power for traction and braking, the rail cars traveling downslope act in pendulum and counter-weight to those ascending, and it has become tradition to exchange candles, tools, and drink as the ascending and descending rail cars pass one another. 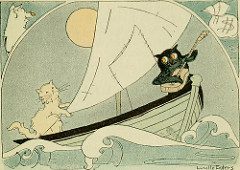 Safely crossing a river on a steady ferry or solid bridge is a worthy expense indeed. Goods and folk are ferried over wide swaths of river, and narrow boats can be hired to travel large distances of canal, river, or lake. However, ferry masters and rogue captains are usually informers beholden to the local realm and take note of all who pass, oft playing the fool in order to overhear loose talk. Some such folk offer information at the right price, though it is usually misinformation. Ferry rafts are poled across shallow, slow running rivers. However, in quicker, deeper waterways, they are assisted by guidelines and horses on either shore.

Some bridges are as simple as slabs laid in a river bed while others are feats of engineering, ironwork and masonry. Bridges only replace ferries where rivers run too rough and rapid or where the demands of passage and trade overwhelm the simple ferry rafts. Most bridges are small and can tolerate foot traffic and those that are larger are usually built and maintained by armies with large siege weapons to be carted about. Draw and swing bridges can exist in highly commercial areas where road and waterways intersect.

Where gravity, timber, and water are abundant, the flume can exist. Usually constructed with wood planks formed into a vee, the flume is supported by rock or wood and can carry logs or other items. A flume is a fast but risky means of travel, exposing a rider to many dangers, and even slower moving, apparently safer flumes can shatter just as easily, breaking under the stress of misuse and neglect. The ruin of a stone flume exists on a cloud-veiled craggy peak and is inscribed with language attributed to giants. An old dam and holding basin are excavated near the peak and would have released water to carry the trunks, though the feeder stream has meandered away, leaving the reservoir dry and but a semi-circle of crumbling stones. Huge trees grow in nearby misty groves. Once felled and dragged to the basin, they passed an iron gate and were sent speeding down the mountain to a lakeside mill. In another land, a near vertical chute channels blocks of ice harvested and floated from high glaciers to food storage sheds in a town below.