Skip to content
Home / Delve into the Depths in the Kobold Blog / Fistful of Lead: Dark Sword Angel

The 2007 Special Edition Elmore Angel is part of the Elmore Masterwork series, produced by Dark Sword Miniatures. It is a piece of Larry Elmore’s iconic artwork (reproduced here) transformed into a 28mm figurine by Jeff Grace, an industry notable himself. 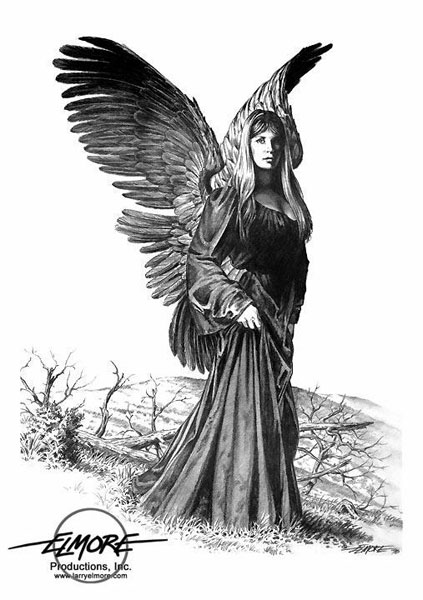 The angel comes in three pieces, a body and a separate pair of wings. She wears a flowing dress, which closely resembles a wedding gown, and has long, straight hair that falls halfway to her waist. The wings are nicely sized with distinct feathers. The model is sturdy and well-balanced on a stable base. [More…]

This is a clean, professional casting with crisp detail and realistic proportions. There were some faint mold lines on the body, which became more pronounced on the insides of the sleeves, and some sprue remnants and flash on each of the wings that required a quick clean-up with a needle file and snips.

There are no obvious slots to fit the wings into, so the body could be used on its own as a human maiden, leaving the wings handy for a future project. Past that, there isn’t much potential for conversion. It would be easy to add to this model, but taking anything away from it would require an investment of time spent filing and sawing. Then again, modifications are probably the last thing on the mind of anyone wanting a little piece of Elmore on the mantle.

All in all, the Special Edition Angel makes for a great display piece, as well as a handy tabletop model for a character like Adriel, the Angel of Hope from Kobold Quarterly #4. My favorite thing about this figure is that it is striking without being overly complicated or cluttered with accoutrements. A novice painter with a basic understanding of shading and highlighting could paint this up very nicely.

Got a new miniature you’d like reviewed? Drop us a line.