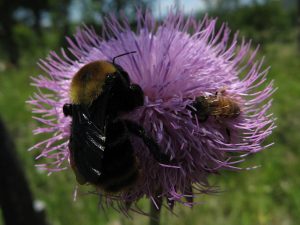 Sir Dryw knew something was wrong when the duergar team halted midway through their charge. The leader held up a mailed hand and snarled something in their strange tongue. Sir Dryw shook his sword and shield. The wizard behind him started to say something but fell silent when the duergar turned tail and ran.

“Do you hear that?” asked Alikia from the rear of the party.

A faint clicking, like knuckles popping, swelled in volume, echoing off cavern walls. Everyone turned to face the direction of the sound as a roiling cloud of winged insects swarmed into view.

Sir Dryw held his ground just long enough to bring up the party’s rear as they raced after the duergar. Looking back over his shoulder, the half-elf knight’s eyes widened. They weren’t going to be able to outrun this new threat…

SPECIAL ABILITIES
Grease (Su) A fumblebee swarm covers its space with a layer of slippery grease. Any creature that starts its turn in the area must make a successful Reflex save (DC 12; Charisma-based) or fall. You can walk within or through this area at 1/2 normal speed with an Acrobatics check (DC 10). Failure means you can’t move that round, while failure by 5 or more means you fall.

An individual fumblebee resembles a bumblebee in size, color, and general shape. Close inspection reveals a disturbingly asymmetrical body: odd numbers of legs of varying lengths, many of them ending with stingers; misshapen compound eyes; and up to a dozen pinkish sphincters that continuously secrete a greasy ichor.

Fumblebee swarms live to eat and breed. A fumblebee goes from larva to adult in a matter of hours, and its lifespan is measured in a few days. A swarm settles only to rest, mate, and feed. During the latter, they burrow into their prey through the eyes, mouth, and ears to devour soft tissues, especially the lungs.

Fumblebees are intelligent, and they can understand (but not speak) Aklo. This leads some scholars to the conclusion that fumblebees must have some sort of rudimentary society, but there is scant evidence to support this hypothesis.

Fumblebees dwell underground, building large hives in the cracks and crevices of cavern rock. Within a hive, fumblebees live much like honeybees, to include producing a noxious type of honey to feed new-hatched larvae, 8 oz. of which can be used as a material component when casting grease. This substitute material component produces an extra greasy effect, boosting the Reflex save and Acrobatics DC by +1 each. A pint of fumblebee honey sells for 25 gp, but it is not easily found in most markets.

When not in their hives, fumblebees swarm through their subterranean territory on the hunt. If prey is particularly good in an area, more than one fumblebee swarm may build a hive nearby. Called a bollix, these collections of several hives sharing a territory cause much fear and worry among underground-dwelling creatures.