Skip to content
Home / Delve into the Depths in the Kobold Blog / From the Archives: Midgard Legends 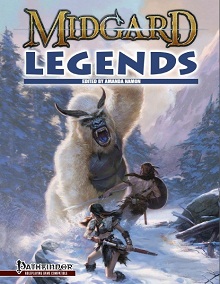 Though there’s been an explosion of 5th Edition compatible material for Midgard, including 173 adventures by last count, there’s a lot of Midgard goodness that came out before 5E debuted, including adventures written for 4E and for Pathfinder. And some of that is still “canon,” assumed to have happened one way or another when the Midgard Worldbook was updated, jumping the world of Midgard forward five years in time. A lot of that content is still usable for your 5E game, and moreover, most of it contains really interesting bits and pieces of lore. So “From the Archives” will comb through these older gems, recommending pieces that can be brought forward to a 5th Edition game. Some of them may be usable whole cloth. Others might need to have their details tweaked to be in line with the current history. Still others just might be good resources for GMs looking to further their knowledge of this fascinating world, whether to enhance their own campaigns or just for the love of learning.

First up is Midgard Legends, a supplement with over 44 pages of content that is highly usable today with very little tweaking. Midgard Legends debuted in 2013 and was Pathfinder compatible. It featured twenty-three “legendary heroes, villains, and monsters” from the world of Midgard.

This isn’t a codex of NPCs (though I would love one of those, kobolds!), but rather, this is a book of legends, as in people and creatures from Midgard’s past, phenomena and beings from the edges of Midgard’s reality. In other words, a lot of these legends don’t have stat blocks, but maybe their legendary weapons and spellbooks do. For the most part, these aren’t people for your players to encounter and fight (though several of them are still around) so much as these are myths and legends with which to flavor your world. These are the histories that come up in a Knowledge (History) check or maybe an Arcana check. These are the stories you uncover in a grand quest or maybe the impetus to go on the quest to begin with. And yes, a few of them are powerful entities that still roam the flat earth.

Take Achaz the Horned Khan for example. A slave from Reth-Saal, he escaped bondage to find his people upon the Rothenian Plains. Achaz eventually defeated the Khan of Khans and became ruler of all Khazzaki tribes. Driven by the goal of hunting and executing slavers, as well as plundering wealth from weaker realms, Achaz might be broadly considered a hero until the day he decided to free the gnomes of Niemheim. There it was that he fell under the control of the Horned Crown, an evil and sentient artifact that demanded sacrifices for the power it offered. Driving Achaz to feed it more and more souls, he gradually turned upon his own people. He was eventually overthrown, and his fiercest warriors, the Bloodriders, still search for the Horned Crown and a way of bringing him back from the dead. Now Achaz isn’t someone you’re likely to encounter in your campaign, but a group of Bloodriders intent on raising him from the dead are, or perhaps you meet a secret organization of do-gooders seeking to find and destroy the Horned Crown before Achaz’s faithful can get their hands on it. There are statistics for the crown that need to be adapted to 5E, but the two pages of lore is what makes this entry so valuable.

The Blackened Man is even better. There’s nothing to convert here but—oh!—is there a lot to take away. Possibly a fey creature or perhaps one of the last members of an ancient race, the Blackened Man walks the world seeking to trick the weak wills of greedy folk or trade with those in despair too distraught to refuse his bargain. To these, he offers “a life for a soul, pain for pain, or a mercy for madness.” And then he bestows his mark on those who agree. Midgard Legends offers a bevy of options for what each of these three boons could be, most of which work fine in 5E with no need for conversion. And the section “Using This Legend” suggests three story hooks to bring the Blackened Man into your campaign. (I know which one I’m going with!)

A legend I particularly like is that of Gunnwyf and the Riphean Herd. Unearthly steeds sacred to Wotan that appear at dusk and vanish in the predawn mists, a clever GM could spin a whole adventure around finding these horses—and successfully riding them with a succession of skill challenges. Those who do are revered through Midgard and are thereafter immune to fear affects. This is also a legend that could be updated in light of new Midgard lore. Gunnwyf, the great black mare that leads the herd, is said to be the mate of Sleipnir. The Creature Codex has since introduced sleipnir (plural) as a species of eight-legged horses, neutral good large monstrosities who loathe the undead. They have their own matriarch, Gullfaxi, and their own agenda, but perhaps there are sleipnir among the four-legged horses of Gunnwyf’s herd, her children with the Sleipnir. Or perhaps Gunnwyf and Gullfaxi are the same horse under different names. Or perhaps both the Riphean Herd and Gullfaxi’s herd feature in a larger, equestrian-themed campaign with pegasi and unicorns as well.

Hune the Doorlord is practically begging to be dropped into your campaign. Actually, he literally is. A dying deity reduced to his core function—the creation of portals—he has no real mind left and no agenda but to create portals indiscriminately for those he encounters. Hune appears, asking only, “Door?” and requiring a wide variety of payments for her services. But his power isn’t what it used to be, so travelers be advised. There’s a delightful table as to where, other than their intended destination, players who enter one of Hune’s portals might end up, landing them everywhere from the “GM’s decision to fifty miles away to another plane entirely.”

An actual living NPC the players might encounter is Jolinar the Cursed. He tried to pull a fast one on Baba Yaga and nearly got away with it. Grandmother granted his request to have extraordinary luck, but anyone to whom he becomes too attached is doomed. Now he’s miserable, living mostly in isolation amid his great wealth. But those who attempt to steal from him or threaten his life come to swift ends. Having Jolinar take an interest in or even join an adventuring party would add some very odd modifiers to the dice rolls and create some very amusing results!

This is but a small sampling. There are others—like Hringida, the first storm, a huge elemental creature comprised of all four elements, a swirling storm with a keep lodged at its heart. The keep is full of unfortunate NPCs and monsters who have been sucked into Hringida, and they have there developed their own factions and agendas, inside the storm. The whole thing hovers over a portal that just might lead to the underside of Midgard. Then there’s Kjord, a young priest who dared stand up to Prince Lucan. And he did for a while. When he was eventually destroyed, he evaporated into ash, and pure light spilled from his body. Now the “Spark of Kjord” wanders Morgau, possessing potential heroes and granting them powers to stand up to evil authority but never for more than eleven days.

From Abderus, First Mage-Lord of House Stross, to Yafram the Desolate, this is a book that will enhance your Midgard game in a dozen different ways. Or maybe twenty-three.

3 thoughts on “From the Archives: Midgard Legends”