Skip to content
Home / Delve into the Depths in the Kobold Blog / Historical Steel: Straight to the Point 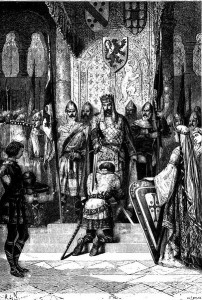 While the column Real Steel offers insights into the forging of weapons, Alex Putnams’s Historical Steel column details their origins and use throughout history.

As mentioned in my previous article, the sword carries a lot of cultural oomph behind it. Bows and spears were originally used for hunting. Swords, however, as a class of weapon were not similarly modified into weapons of war—they were weapons of war from the beginning. They are symbolic of war, power, legitimacy, prestige, and honor for very good reasons, and their mystique transfers well to the realm of roleplaying games.

Allow me to break that mystique and expand on the pathological pun in the title by getting to the point: there’s no such thing as a “perfect” sword design. Even more than axes or polearms, swords were highly specialized weapons created by artisans using the most advanced metallurgy of their times… for specific fighting styles against different targets. The gladius was designed as a stabbing weapon for use with a shield in ranks, although it could be used for slashing or hacking with difficulty. A katana can be used for thrusts although it works best at cutting. The Abyssinian shotel is neither intended for thrusts nor slashing but, instead, for hooking around an enemy’s shield. An estoc is an anti-armor weapon to thrust through mail or to find gaps in heavy plate armor, while the scimitar and rapier were made for fighting lightly armored or unarmored opponents…

The list goes on. Roleplaying games by their nature assign abstract numbers to represent vastly different swords designed for different purposes, usually pulled from across both cultures and time periods. It’s a useful abstraction to make the game playable; dwelling on it is like applying stats to apples and bananas. From a roleplaying and worldbuilding standpoint, it’s probably more useful to take time to think about the different styles of swords your game’s cultures use; they both influence opponents and tactics and are influenced by them. New clashes of culture and warfare may lead to subtle or large changes in a culture’s arms and armor, and an arms race between cultures can make a short plot hook or an entire campaign.

Thus said, there’s no way I can cover the history of history’s favorite weapon in one article, so I’ll be starting with the most familiar of blades: the (usually) double-edged straight sword.

Early sword design was influenced (and limited) primarily by chemistry more than by intention. Swords first arrived with the Bronze Age because stone is too brittle to make weapons longer than shiv-like knives. With the technology to work copper and bronze, the dagger was scaled up to an entirely new design, around the 1600s BCE. (Bronze axes and sickle-swords such as the khopesh were already around, but they’re a different matter.)

Bronze swords were double-edged, and although they could cut, they were soft enough to deform and bend, so they worked best for thrusting. This also limited their feasible length. (The elaborate sword fights seen in the 2004 movie Troy were impractical for this very reason; the Greeks of the Trojan War used their swords as backup and wielded spears as a primary weapon.) A leaf-shaped blade further optimized the capabilities of bronze.

Iron swords began their existence (circa 1400 BCE) with the Iron Age itself, but it wasn’t until iron forging trickled into Europe (circa 800 BCE) with the pre-Celtic Hallstatt culture that iron swords became common. Unalloyed iron is only nominally better in combat than bronze, but iron ore was more readily available to smiths than copper and tin, and more complicated and expensive steel quietly followed. The leaf-bladed bronze short swords became the Greek xiphos and the “Celtic” sword, and by the time Rome conquered the Iberian peninsula (circa 200 BCE), the gladius hispaniensis (literally “Spanish sword”) had become the trademark Roman weapon. It too was optimized as a piercing infantry weapon. The later, longer straight sword known as a spatha was originally adopted as a cavalry weapon (as it could slash from horseback). It later gained popularity with both the Roman infantry and their Germanic barbarian adversaries.

These spatha-type swords were brought back to Europe and changed subtly, gaining a shallow taper or fuller. While there were exceptions (King Ervig, circa 700 CE, King of the Visigoths, made ownership of a sword mandatory for would-be soldiers), swords primarily remained expensive tools of war. (Beowulf’s loaner Hrunting was named not because it was magical but because it was a chieftain’s heirloom sword.) These swords grew a bit longer, gained more prominent fullers, and became the familiar single-handed Viking sword.

By the 11th century, unarmored-to-the-waist barbarians were being replaced by armies in padded jackets, brigandine, and mail, and the Viking sword’s hilt grew into the familiar cruciform shape of the arming sword (or knightly sword, or war-sword; a longsword is different). By now, this slashing and cutting weapon was taken to the Crusades by both sides. The scimitar, originally an Eastern European weapon, didn’t show up in Turkish or Arabian armies until the 1300s.

When full plate armor was developed in the 14th century, the straight sword adapted to it, becoming the hand-and-a-half longsword (the bastard sword being a 15th/16th century term for such a sword’s hybrid grip), as did the techniques. It retained a cutting edge, but the longer grip (and sometimes an unsharpened ricasso just in front of the crossguard) and point allowed it to be a powerful thrusting weapon. Even the quillons and pommel could be used for bashing and grappling. The cross-section of the sword adapted as well, becoming narrower but stronger, as diamond and hexagonal shapes combined with fullers made a sword deceptively fast for its size. Some designs, like the estoc, almost entirely gave up their slashing edges to become a specialized weapon for smashing through chain and the thin gaps in plate armor.

Two-handed swords—famous examples include the claymore and the zweihander—originated from the longsword and had become their familiar types by the 15th century. They remained in use through the 1600s, primarily as specialized anti-infantry weapons. Thin, long blades combined with long grips meant greatswords were surprisingly light and agile for their size—later giant two-handed swords were meant less for battle and more as ceremonial items.

Plate armor worked well not because of its thickness but because it was individually fitted to the wearer, but this made it prohibitively expensive. Once firearms developed to the point that they could reliably defeat plate armor (several centuries after their first use on battlefield) in the 16th century, a tradeoff in armor was made by making heavier cuirasses but losing the armor on the extremities. Overall, this allowed greater mobility and made “munition plate” armor cheap enough to supply whole armies with it. Thus, the straight sword design drifted back to a single-handed design balanced for cuts and thrusts. Decorative hilts first developed for later longswords and civilian rapiers became the basket-hilted swords of the 16th-18th centuries. Such regional variants as the Schiavona, the Walloon sword, the single-edged pallasch, the Mortuary sword, and the basket-hilted claymore (sometimes called a “claybeg” in modern sources) were designed for heavy cavalry, dragoons, or sometimes as a backup weapon for infantry. The term broadsword refers to such 17th century heavy, single-handed military swords.

The cavalry saber was a cross between the military straight sword, the civilian dueling sword, and the scimitar, and by the 19th century, the light, mobile cavalry of the day had switched to curved sabers. (These were eventually replaced as sidearms by the invention of the reliable repeating pistol, and such innovations as the machine gun and the tank made cavalry itself obsolete.)

There were some exceptions to the standard sabers: the United States Model 1913 Cavalry Saber (designed by then-lieutenant George S. Patton) was a basket-hilted straight sword, and real-life adventurer/commando/surfer/eccentric “Fighting” Jack Churchill used a basket-hilted claymore (and longbow) during the Second World War. Though today it’s been relegated to a status symbol and ceremonial item, the sword was a serious, specialized weapon of war for the past 3,500 years of Earth’s history, and the straight sword one of its most iconic forms.

For much of history, the sword of the day was called exactly that: a sword. The terms kopis, xiphos, gladius, spatha, and espada all, in the end, simply mean “sword.” Different types of swords were rarely given specific names in their day, and with the sword transitioning from a weapon of war to modern fencing (itself a spin-off of nobles’ honor dueling), a Victorian interest in the Romantic aspects of swords generally led to vague, inaccurate name plaques on museum displays.

Terms such as rapier and broadsword were sometimes used for anything that had a rapier-like hilt or any double-edged sword—a bit like categorizing sports cars based on what color they happen to be. In 1919, the Norwegian historian Jan Peterson started instead categorizing old Viking swords by their construction. His system was updated in 1927 by R.E.M. Wheeler into nine categories (I-X). Ewart Oakeshott took this approach to the Medieval/Renaissance straight sword in 1960, calling his own thirteen categories Types X through XXII.

Regardless, whether your gaming group prefers historical accuracy, modern terms, or those names granted by game mechanics, just make sure everyone is on the same page.

3 thoughts on “Historical Steel: Straight to the Point”