Skip to content
Home / Delve into the Depths in the Kobold Blog / One Too Many (Voices in My Head): Gen Con Undercover 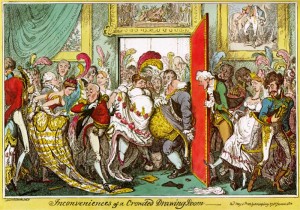 Welcome to Greg Vaughan’s One Too Many (Voices in  My Head). His last, best chance to exercise those pesky demons. In his column you’ll find… I really have no idea, but he gave me $20, so… all yours Greg!

(Actually, this is a very special recounting of his Gen Con experience this year.)

My name is Greg Vaughan, and I’m a gamer. At least, that’s what my badge says.

Between you and me, though, I prefer the subtle melodrama of professional wrestling (it’s real you know!), and I’m a lifetime subscriber to Cat Fancy magazine. Just a regular Joe.

In an effort to get in on this new “reality TV” thing (I think it’s really gonna to take off in the next few years), I have set out to create and star in my own series that takes a look into the seedy and secretive subculture of the “RPG gamer.” Extensive research has led me to the conclusion that that best time to observe the gamer is in the annual pilgrimage to the mecca of gamer interaction—the “gaming convention.” With keen instincts for observation and journal in hand, I intend to be accepted into and observe the gamer in his natural environment: I’m going to Gen Con undercover…

Arrived at airport and showed cabbie my gamer badge. I let him in on my secret mission and asked for any pointers he could give. He was able to carefully mask his obvious enthusiasm beneath a curious rolling of his eyes and mentioned something about paying the tip up front. I happily obliged, wanting to learn these gamer customs in all situations, and gave him the customary 20-spot that he informed me all gamers use in the matter of tipping. When he left me at my hotel and received the second half of the tip (another $20 that he assured me was a part of the gamer culture), he laughed uproariously as he drove away. Unsure if that is another part of the culture or a feature of Indianapolis cabbies. Will have to study further.

Heading across the street for a bite to eat, I witnessed the wondrous costumes and pageantry that accompanies these gamer conventions. One man in a particularly convincing costume of a village drunk (complete with odor of stale beer and urine) asked me for a dollar. I happily showed him a twenty—held between two fingers like a prize—and, to remain in character, playfully told him he would have to perform an authentic drunkard’s dance for it. The doctor says I’ll regain feeling in the fingers as the severed nerves heal. May need more twenties.

With much of Day 1 spent in a local ER, this was my first full day to experience the “Con” as they call it. I arose early and headed across the street to a local bagel shop for a quick bite to eat. I stepped up to the counter and cheerfully ordered a sesame seed bagel with two containers of almond-flavored cream cheese. The clearing of a throat caused me to turn and face a very large man—apparently there was a line I had failed to notice that wrapped around the interior of the entire store. I gave him my best cheery smile and joked about the dangers of getting between a guy of his size and food. Took most of an hour to get all the sesame seeds out of my nose.

Anxious to see the fabled “Exhibit Hall,” I resumed my mission. But the mission is thirsty work (plus I still had the better part of half a sesame seed bagel wedged into my sinuses), so at one point when I saw a moderately attractive woman—though she had strange, probably congenital, condition causing her pointed ears to protrude considerably—I paused to ask her if she knew where I might find a decent frappacino (a staple of gamers I am told… by a cabbie). She told me what I could do with my frappacino, which was both unpleasant and anatomically unlikely. Apparently, I had found a LARP room and proceeded to hurry out before the rubber tip came off of her otherwise historically accurate rapier.

Friday night was a highlight, as I was invited to attend a secret meeting of an award-winning, Illuminati-esque organization working behind the scenes of worldwide gaming called the WereCabbages. I was allowed to join in their annual game of Werewolf, a charming little game of whodunit where the participants all use mob mentality to vote on who will be lynched, all in an effort to unmask a werewolf secretly in their midst. For the fourth straight game, I was lynched despite being an innocent villager. I began to think that they didn’t really think I was werewolf but just enjoyed voting to lynch me… at least once before the game actually started. Plus, they seemed to invoke the “lynched villagers have to leave the room” rule only when I was lynched. These gamers, they are a lot of jovial and good-natured jokesters. Took notes to better emulate their interactions. Also made sure to secretly place as many of their 4-sided dice (d4s they call them) as I could find on the floor outside the door in the dark hallway. I hope you wore shoes… hippies.

The main event, the center ring, the grand cotillion—the Ennies. I managed to secure an exclusive pass to enter this hallowed event after giving the standard tip to only four gamers, at least one of whom I’m pretty sure had no affiliation with the event. These gamers and their subtle networks, I must learn their secrets. Inside the event, I found both a buffet with bruschetta (woohoo!) as well as a burly chap with a full beard and the trappings of a Mongol warrior. In congenial fashion, I asked him what foul creature had so beset him with an ugly stick to which she responded with a stiff arm to my jaw, and I spent the next 20 minutes coughing up bruschetta. These LARPers are everywhere… and sensitive.

The parties after the Ennies were quite extravagant with too many gamers dressed as Visigoths packing bars in sweat-soaked crowds attempting to recreate the entire Visigoth sacking of Rome—the golden beverage to simulate the gold of Rome, and the Visigoth gamers as… well… the Visigoths. No less than three bearded warriors, again women—perhaps dwarves, I was never completely sure—laughingly asked me for “tips” (evidently having spoken to one big-mouthed cabbie), and one lass who was well into her cups said something about crossing the Rubicon. I decided to not stay around for the rest and left with what shreds of dignity and meager remains of my spending cash I had left, only to find back at the hotel that my erstwhile roommate had rented my bed to a group of latecomers who had driven all day and turned in early. The hotel was sold out of other rooms, and somehow my credit card had been cancelled for multiple charges to assorted sordid online institutions—a parting WereCabbage hoax, it seems.

I soon found that the Indianapolis bus benches were only moderately softer than the sidewalks themselves, but there was no way I was going to try out one of the flower beds that tipsy gamers kept making short visits to between trips to the bars. The ambience wasn’t great, but it beat the five gamers currently in my bed.

Heading home today. Ought to have enough material to cook up a decent show concept for the producers. Woke up to find that my shoes had been donated to a homeless guy during the night. I know, because he was still tying them when I woke up. He seemed unconcerned with my protests, and when I leaped off the bench in pursuit, my foot found one of the d4s I had picked up from the night before. Added to my notes: a 60-year-old wino can still outrun a gamer with a plastic punji stake firmly embedded in the sole of his foot.

As I gathered my few possessions—my swag bag having been lost in the previous evening’s free-for-all—and hobbled for a cab, I was approached by a man asking if I knew of any hotels nearby that had vacancies. Nearly bit off three of his fingers before he got away.

The cab ride to the airport was sullen, and I only looked up at the end and realized it was the same cabbie as before when he opened the door to let me out. He took one look at me—unshaven, unshowered, with bus bench hair, and no shirt (where had that gone?)—took a cursory sniff and told me my mission must’ve been a success in discovering the secret life of a gamer. As a parting gift of congratulation, or perhaps mercy for the passengers on my upcoming airline flight, he handed me a bar of soap… it had a d4 embedded in its center.

Reality TV, it’s definitely the wave of the future, and I’m going to be onboard. I wonder if Real Housewives of Sioux City is looking for a gaffer or key grip.

19 thoughts on “One Too Many (Voices in My Head): Gen Con Undercover”