Skip to content
Home / Delve into the Depths in the Kobold Blog / Monday Monster: Fright 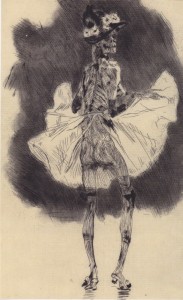 The ghastly humanoid cadaver jerks and shudders forward with shocking speed. Rotting skin flaps back from its grotesque carcass, uncovering insects scuttling over moldering sinew and gristle. Entrails dangling from its abdominal cavity writhe about, as if grasping at things unseen. The corpse screeches an open war razor along the floor as it comes, and its visage twists into a heart-freezing leer that should not exist outside of a nightmare.

Those who believe that their own nightmares contain horrors more terrifying than anything dwelling in the real world have never laid eyes on a fright. Frights are the undead cadavers of folk killed by their own terror, people literally scared to death. Undeath warps them into hideous, cunning monstrosities inexorably driven to terrify others to death. Few can look upon a fright for more than a handful of moments without horror overwhelming them utterly. Most who cannot escape these freakishly swift sadists die in heart-stopping terror…

SPECIAL ABILITIES
Create Spawn (Su) All humanoids slain by a fright’s mortifying appearance dies with a horrified expression frozen on their faces, and they rise as free-willed frights 24 hours later.

Reflection Vulnerability (Ex) A fright that sees a clear reflection of itself must make a DC 14 Will save or be stunned for 1 round. Once it saves successfully, it cannot be stunned again by the same reflective surface for 24 hours.

Terrifying Traps (Su) Frights imbue mechanical traps that they craft with supernatural fear. Anyone snared or injured by such a trap must make a DC 14 Will save or become shaken for 1d6 rounds. This is a mind-affecting fear effect. The save DC is Charisma-based.

Uncanny Glide (Su) Although frights can fly with a speed of 20 ft. over any surface with a slope of 45 degrees or less, they can’t fly more than 1 ft. above the surface.

Frights manifest death’s most ghastly aspects. Some are bloated bags of death fluids. Others are skeletal horrors bound together by quivering slivers of muscle, blackened tendons, and pulsing veins dripping gore. No two are alike. All frights’ dying expressions mutate into supernatural masks of terror. All move with harrowing speed, their jarring, preternatural mobility appalling to behold.

Frights yearn to scare victims to death, not kill them with blows. Masters of suspense and shock, frights dart in and out of sight and cover, far beyond melee reach, until their mortifying appearance overwhelms foes. They dimension door directly behind foes that consistently avert their eyes. They pursue fleeing victims relentlessly. They relish the knives, war razors, and flensing tools they use to skin helpless victims. Only their own reflections unnerve them.

Frights haunt fear-inspiring locations notorious for past atrocities, like abandoned insane asylums and derelict slaughterhouses. Within, they erect macabre gauntlets of hidden, fear-inducing traps, over which they glide. (Frights favor low-damage traps, Wisdom-damaging poisons, and snares that entangle or pin.) They adorn these crucibles with depravities, like decapitated heads strung up with viscera, and then drive victims inside. Frights also hunt abroad, feverishly stalking former friends and loved ones (who suffer -2 or -4 penalties, respectively, on their mortifying-appearance saves), and babies, which become dreadful, shocking spawn.