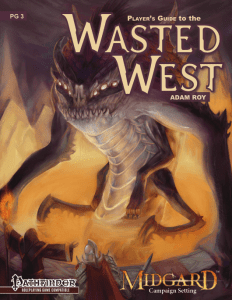 Once the height and center of human civilization, Midgard’s Wasted West was brought low by hubris and alien wizardry. Now all that remains are the wind-scoured bones of mighty cities and their doomed citizens. Only the bravest, most reckless or most desperate adventurers dare to face its dangers…which is, of course, where you come in.

The new 30-page Player’s Guide to the Wasted West  provides players with a regional overview of the Wasted West, plus a wide range of new powers and options for any Pathfinder Roleplaying Game campaign, including:

You can pick up the Player’s Guide to the Wasted West today at Paizo, DriveThru RPG and RPGNow, and behold its alien wonders! Here’s a sneak peek at one of the new spells of the Wastes: Call Goblin Warriors. 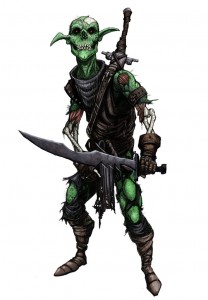 During and after the Great Mage Wars, Bemmean archmages made arcane pacts with charmed or otherwise suborned goblin tribes. Both signatories sealed the pacts by tracing runes with their own blood on stone pendants that were worn around the necks of the archmage and the goblin chieftain.

By casting the spell while clutching the rune-stone pendants, the archmage (or other possessor of the rune- stone) could summon the warriors of the tribe to fight or serve them for a time, as per the summon monster IX spell. The spell immediately summons 8d8 goblin warriors (similar to the Pathfinder Bestiary) and one goblin chieftain (use the bugbear statistics from the Pathfinder Bestiary).

They appear in a burst of light (all opponents within 60 feet make a Reflex saving throw or be dazed for 1d4 rounds). They appear where you designate and act immediately, on your turn. They attack or perform other actions to the best of their ability as commanded.

The holder of the runestone can communicate with the goblins, even if the summoner does not normally speak Goblin. At the end of the spell’s duration (or if dispelled), the goblins disappear in a flash of smoke that acts as an obscuring mist for 1d4 rounds. If the runestone is taken from the neck of the chieftain or caster (alive or dead), the spell is immediately dispelled.