Skip to content
Home / Delve into the Depths in the Kobold Blog / Midgard Legend: Izikorlevix, Scion of the Crimson Tyrant 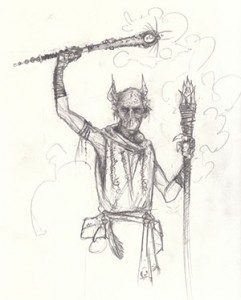 Though the Midgard Tales Kickstarter phase is over, we have another legend, Izikorlevix, here for you to enjoy. If you want more Midgard in your life, then venture on over to the store to check out the new Midgard Tales product page.

Though the Burning Spire, where the fabled Kobold Emperor once ruled, has long since been ruined, everyone on the western borders of the Dragon Empire knows of Izikorlevix. The diminutive but ambitious kobold ruled over at least a dozen city-states and lesser kingdoms at the apex of his reign. Although many records from the time have since been lost, what remains reveals a brilliant figure, both shrewd and subtle.

Izikorlevix (“Is-a-core-lev-icks”) came from humble beginnings; no one remembers the exact location of his birth, and he seemed uncaring in his ignorance. According to official records and surviving folklore, he was a sorcerer who traced his lineage back five hundred generations to an ancient red dragon known only as the “Crimson Tyrant.” Seeking to claim the mantle of his ancestor, Izikorlevix conquered hamlets, then towns, then cities, and finally kingdoms, using each victory as a foundation for the next, frequently employing cunning statecraft, blackmail, and politics—augmented by his renowned talents in charms, illusions, and enchantments—to achieve his goals.

Izikorlevix was responsible for dozens—maybe hundreds—of excavations across Midgard, accumulating lore and artifacts to sate his hunger for power. Eventually, he attracted the attention of a council of dragons who grew suspicious and contemptuous of a mere kobold wielding such great power. The most monumental challenge to his rule came when they marched on his mountain home, seeking to punish his pride. Yet his greatest challenge was also his greatest triumph; having anticipated their hubris, Izikorlevix secretly fashioned several items of great power. These scepters permitted him to mentally shackle the dragons like any wild beast. Accompanied by his lieutenants, Izikorlevix met the dragons at his northern border and first turned them against each other before magically binding the survivors into his service. They remained his slaves until the day he died. The Rage of the Smoking Valley, as the battle came to be known from the devastation inflicted on the battlefield, secured his position for over a century.

Although an ambitious autocrat, his rulership remained remarkably egalitarian. His elite soldiers, known as the Dragon’s Breath because of their distinctive red dragonscale longcoats and enchanted dragon bone crossbows (said to be able to pierce any armor or hide), hailed from all walks of life, all social classes, and all races. The Kobold Emperor cared more for practical concerns like competence and loyalty, and his meritocratic inclinations, together with a cult of personality fortified by his vicious enslavement of the dragons, led to few uprisings.

Regardless of his efficient manner, he cared little about his legacy. He died a natural death, at the age of 212, setting off a brutal succession war between the dozens of heirs and several powerful generals. Internecine conflict weakened the empire, and a few years later, the liberated dragons struck again, razing the Burning Spire and shattering the scepters Izikorlevix created to control their kind. The Dragon’s Breath disbanded, but a few spirited away fragments of the broken scepters, which esoteric sages and eager treasure-hunters believe still lie waiting to be found by one who knows where to look.

Fragment of the Scepter

This looks like little more than a ruined scrap of steel, a fragment of twisted gold filigree, or a shard of a large gemstone, but it radiates great power. When kept on the person of a bearer (not in an extraplanar or nondimensional space), a fragment of the scepter grants its wearer a +4 bonus to AC and saving throws against creatures with the dragon type. In addition, the bearer may target these creatures with mind-affecting spells or abilities, even if they are not normally a valid target. If the wearer has a free hand and wraps it around the fragment as the spell is being cast, he or she also gains a +4 bonus to overcome the target’s SR.

The fragments can be completely destroyed only by being boiled in the blood of a slain true dragon, and subjected to a breath weapon while still glowing hot.

1 thought on “Midgard Legend: Izikorlevix, Scion of the Crimson Tyrant”