Skip to content
Home / Delve into the Depths in the Kobold Blog / Ancient Weapons: The Trebuchet 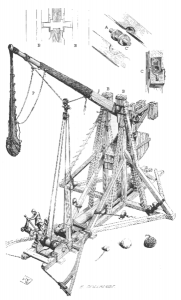 Trebuchets are the dominant siege engine in parts of the world. They have advantages over many other weapons, including longer range, the ability to throw a variety of objects, easy maintenance, and variable power.

Trebuchets include a frame from which a long, unbalanced arm (virga) swings. The virga is attached to the frame by means of an axle or pivot point. The longer section of the virga ends in a sling, the shorter in a counterweight. The long end is 3 to 4 times the length of the short end. The whole rests upon a base; the guide chute is attached to the base. For game purposes, the whole weapon can be assumed to weigh 5 times its maximum counterweight load and cost 1 gp/lb.

The counterweight mounts on a swinging connection (a hinge, chains, etc), to the virga. It is often a heavy net or box, strong enough to contain metal spheres, boulders, or other heavy objects…

The sling is literally an oversized slingshot, attached to the virga by rope or a chain, and sturdy enough to withstand the centrifugal force applied to the ammunition.

To fire a trebuchet, the “ingenitor” (or engineer) must prop up the counterweight. Various means have been tried for this. A simple enough means is to empty the weights from it, then pull the long end of the virga to the ground by means of an attached rope. Larger trebuchets have used human hamster wheels. Once in position above the balance point, it is braced (a sturdy log with an attached chain will serve, placed under the counter weight). The counterweight is then refilled. Ingenitor practice with their specific weapons, knowing (and recording) how much counterweight is needed to throw a given weight of ammunition to a given distance. Generally, the counterweight for a shot weighs 80 to 100 times as much as the ammunition load.

Next, the sling is placed in the guide chute. This is a trough, running between the supports of the frame, almost to the prop. The sling is then loaded; ammunition can include metal spheres, boulders, ceramic pots full of flammable materials (or skunk musk, beehives with living bees, rotten fish, etc), dead animals (complete with disease), or whatever else will harm the target. Some objects can be set aflame before launch. Trebuchets are often used against walls, so boulders and metal objects are preferred.

When the ingenitor is ready to fire, he (hopefully) makes sure that everyone is out of the way, and removes the brace (or orders it removed). The counterweight falls, whipping the long end of the virga up. The sling rushes the length of the guide trough with its load, and swings over the machine. With the counterweight at its lowest point, the sling releases its load toward the target. Incidentally, any vertebrate creatures being fired die at this point, their necks broken.

Determining the range and damage achievable by a trebuchet is the subject of many complex formulas available on the internet; there is not room here to reproduce and explain them. A rough and ready rule, simple enough for table top RPGs, is to find the range of a shot by multiplying (the sum of the length of the arm plus the length of the sling plus the height of the pivot point) by the weight of the counterweight, then dividing by the weight of the projectiles. However, this will yield results that bear no resemblance to reality.

The projectile reaches its maximum height at 50% its total range. This should be around 75% of the maximum range for game purposes. A lighter projectile results in a lower trajectory; a heavier projectile flies higher.

To figure damage, find the range for the shot. Multiply by the weight of the shot, and divide by 10. On a hit, roll 3d6 and multiply by that number; the GM may lower damage for soft objects (rotting cows) or increase it for dense ones (lead balls). If multiple projectiles are fired, divide the damage among them; if they are of uneven weights, each one does damage proportional to its percentage of the total weight.

Loading requires one round for each 20 lb. of weight; so, to load 2,000 lb. of counterweight and a 20 lb. projectile takes 101 rounds; crew-served weapons can divide this number by the number of crewmen. This time includes positioning the arm.

Whether attacking a castle, harbor, or the lair of a dragon, a properly crewed trebuchet can greatly improve a force’s chances of success. Its variety of potential ammunition is but one of its many advantages; it can shoot over (or through) castle walls, provide fire and bees to add excitement to the lives of foes, and generally make warfare easier for its users.

7 thoughts on “Ancient Weapons: The Trebuchet”