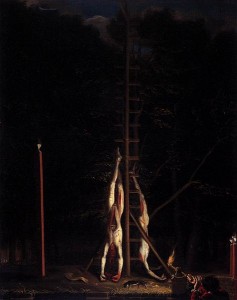 The predatory forbearers of doppelgangers, flesh mimes are feared for their ability to shapechange into mirror-like duplicates of their prey. Flesh mimes are carnivores in every sense of the word, feeding on the bodies of their quarry and the psychic energy of their prey’s accumulated experience. Channeling this energy, flesh mimes are able to duplicate their enemies’ most hard-won combat maneuvers, learning years worth of swordplay and magical training in seconds.

Flesh mimes are rarely encountered in their natural form but glimpses of the creatures can be seen between transformations. Long of limb with rubbery gray skin, their faces are featureless save for a pair of eyespots and a gaping lamprey-like mouth. Their morphic bodies are able to spontaneously generate sharp bony protrusions and hard armor plates, both for combat and disguise…

Dungeoneering DC 20: Flesh mimes are a race of primitive doppelgangers that use their shapechanging abilities to hunt instead of spy. They cause confusion in combat by duplicating their enemies, both in form and in combat abilities. Unlike doppelgangers, the bodies of flesh mimes can imitate clothing, armor, and weapons.

Dungeoneering DC 25: Flesh mimes’ aberrant ties have led some scholars to deduce that they occupy a “missing link” in the evolutionary chain between mimics and doppelgangers. Most doppelgangers dismiss this idea, claiming flesh mimes are nothing more than a mutant offshoot of the original doppelganger race.

Though savage, flesh mimes are intelligent enough to work with other creatures, exhibiting the same mercenary streak as their more civilized brethren. However, while doppelgangers sell their services for coin, flesh mimes are interested only in a steady supply of fresh meat and stolen experiences. When prey runs scarce, these alliances quickly break down and flesh mimes turn on their former employers.

A flesh mime usually hunts by adopting a form its prey would find non-threatening and attacking at the first strategic opportunity. Once close enough to its chosen target it latches on, taking advantage of the confusion sown by its perfect duplicate ability and drinking deeply of its victim’s accumulated training and experience. Once it has successfully duplicated an encounter power it moves to another target, preferably a powerful striker or controller, and waits for power siphon to recharge while fending off attacks.

MINOR ACTIONS
[m] Power Siphon (psychic) • Recharge 5, 6
Attack: Melee 1 (one creature grabbed by the flesh mime); +16 vs. Fortitude.
Hit: The flesh mime duplicates the highest level encounter power known by the target. Until the end of the flesh mime’s next turn, it can use that power as an encounter power. This power has a +18 bonus to hit and uses the grabbed target’s ability score modifier on the damage roll as well as for any other effect of the power. If the power inflicts weapon damage, it uses the weapon damage of the grabbed creature. The damage roll does not include any bonuses or penalties that the owner of the power may have. A flesh mime cannot duplicate the same encounter power more than once in a single encounter.

Shapeshift (polymorph) • At-Will
Effect: A flesh mime can alter its physical form to take on the appearance of any medium humanoid, including a unique individual. By altering its skin and manipulating chitinous extrusions, it can create convincing weapons and armor. It remains in this form until it uses this power again.