Skip to content
Home / Delve into the Depths in the Kobold Blog / Expanding Codex: Ghost Dragon 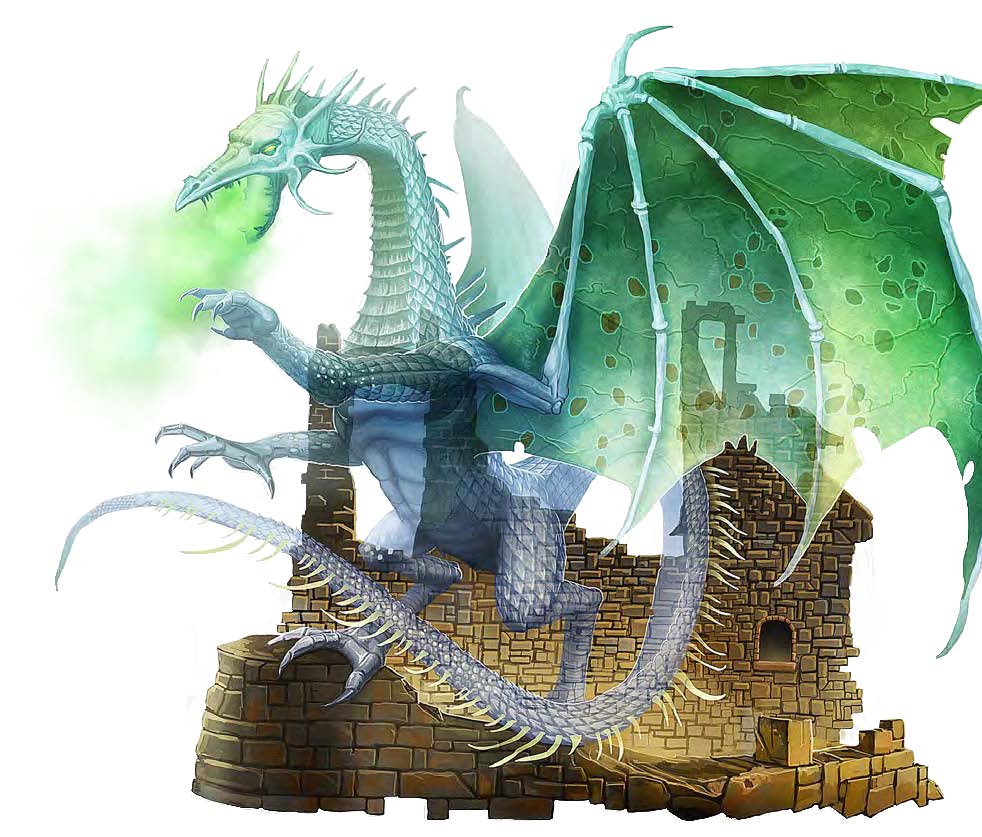 The following changes allow GMs to alter a ghost dragon without modifying its challenge rating.

Shade of Life Breath (Recharge 5–6). The ghost dragon exhales a blast of energy reminiscent of its former existence combined with the terrible energy powering its current existence. Each living creature in the ghost dragon’s 30-foot-cone blast must make a DC 17 Reflex saving throw, taking 27 (5d10) damage based on the living dragon’s breath (acid, cold, fire, and so on, but the damage type doesn’t change) and 27 (5d10) psychic damage on a failed save or half as much damage on a successful one. A living dragon that fails its saving throw must succeed on a DC 16 Wisdom saving throw or become frightened for 1 minute. A frightened target can repeat the saving throw at the end of each of its turns, ending the effect on itself on a success.

The following magic items and spell are inspired by abilities possessed by a ghost dragon.

Scales from dead dragons cover this wooden, curved horn. You can use an action to speak the horn’s command word and then blow the horn, which emits a blast in a 30-foot cone, containing shrieking incorporeal dragon heads. Each creature in the cone must make a DC 16 Wisdom saving throw. On a failure, a creature tales 8d10 psychic damage and is frightened for 1 minute. On a successful save, a creature takes half as much damage and isn’t deafened. Dragons have disadvantage on the saving throw and take 16d10 psychic damage instead of 8d10. A frightened target can repeat the Wisdom saving throw at the end of each of its turns, ending the effect on itself on a success.

If the horn’s magic targets a dragon, it has a 20% chance of causing the horn to explode. The explosion deals 16d10 psychic damage to the blower and destroys the horn.

Once you use the horn, you can’t use it again until the next dawn. You can also regain the use of the horn after you kill a dragon and complete a short or long rest.

A creature killed by this spell has a 10% chance of returning as a ghost.

A ghostly draconic maw superimposes your face when you cast this spell. For the duration, you can use your action to make a melee spell attack against a target within 5 feet. On a hit, the target takes 2d10 piercing damage and must make a Constitution saving throw. On a failed save, the creature takes 4d8 necrotic damage. On a successful save, the creature takes half as much damage.

At Higher Levels. When you cast this spell using a spell slot of 5th level or higher, the necrotic damage increases by 1d8 for each slot above 4th.

I’ll be turning my attention to the newly released Tome of Beasts 2 in future installments. If you’ve got a favorite from that book, please let me know in the comments or elsewhere in the Kobold warrens, and I’ll make sure to add it to the queue.