Skip to content
Home / Delve into the Depths in the Kobold Blog / Review: Skinwalkers (A Pathfinder Tale) 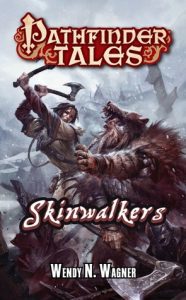 Jenderda has gone home to escape her pirate past. It happens that Jenderda lives in a stark rough island chain known as the Ironbound Archipelago, which is dominated by Nordic culture, longships and all. Jenderda wants to settle down and raise her son away from the swashbuckling life she led. She returned to find her childhood home ransacked, her father brutally murdered, and her sister missing a presumed dead, thanks to raiders. Many years later she has put her past behind her and has become a respected trader. All this comes crashing down around her as the islands are once again threatened by a strange clan of shapeshifters known as Skinwalkers, who start pillaging nearby islands. The raids and their grizzly results follow the same pattern of the raid that killed Jenderda’s father. Now Jenderda must take up her father’s axe and defend her fellow islanders and, most importantly, her son.

Skinwalkers comes really close to being a pirates and Vikings mash-up, without feeling like Wagner was trying to make it an actual mash-up. There are so many similarities between the two, yet they are so different. I could easily see where Jenderda growing up in a Viking culture would make her a really great pirate. This book is full of  everything thing it should be. There are myths, legends, sea trade, sea battles, shapeshifters, combat, and a sense of community and unity, even when people are from different islands in the Ironbound Archipelago.

By far, the strongest aspect of this book was the characters. Wagner caught us up on all of the characters’ past very quickly and the knowledge gained about those characters flowed naturally. I never felt like I was reading a dossier. Rather, I felt like I was being told someone’s life story by a close friend. Even the minor characters felt like they mattered, but at no point did getting to know them bog down the story.

Jenderda was just the right balance of regret and hope. Her love for her son and for the community that she grew up in was never in question. Yes, she left, and, yes, the pirate crew preyed on some of the vessels coming out of the Ironbound Archipelago, but she never forgot where she came from. I actually would like to learn more about several of the supporting characters, and that is one of Wagner’s many talents as a writer.

Wagner’s descriptions really help set the mood, I could feel the weather worsening and the onset of the colder months as it was described in the book. I could picture the mangled bodies after of the Skinwalker raids, I could hear the flies buzzing and almost smell the decaying, mutilated bodies. Wagner’s descriptions didn’t go into the gruesome details that Stephen King goes into; rather she used economy of words to set the tone and mood, and the characters’ reactions to most of those situations was realistic and fitting for who they were and what they had encountered in life.

Some of the fight scenes felt like they were rolled up on a standard RPG random encounters table. Jenderda’s encounter with the squid was a perfect example. Then, when the fights did start, I didn’t feel like Wagner had complete control of the fight or the flow of battle. Combat is confusing when you are involved in it, but that confusion should be conveyed by an author without being experienced. I could understand if every fight was written from a first-person perspective, but not all of them were, and when they were not, they seemed disjointed and narrow in their view.

For me this novel broke even: I loved the mash-up, the characters were developed well and were interesting, but the combat and some other minor aspects gave parts of the novel a disjointed feel that was hard to overcome. I’m glad I read this novel, and I would gladly read other works by Ms. Wagner, but for Skinwalkers once was enough.