Skip to content
Home / Delve into the Depths in the Kobold Blog / Trapsmith: The Skull-On-A-Rope 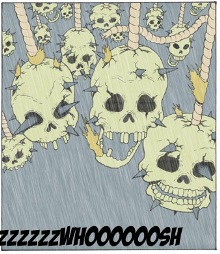 Every good trapsmith knows about the three C’s: Cheap, Crude and Cruel. Every wise trapsmith knows that goblins excel at designing traps based on the three C’s and as a result, many retain the services of a goblin as a servant or assistant. Neighbors may complain, but consulting a goblin’s expertise is usually worthwhile, as goblins themselves are cheap, crude and cruel. They seem full of inventive ideas for maiming and mutilation, and seem to consider trapmaking an art akin to decorating tribal banners.

The skull-on-a-rope is a perfect example of this goblin philosophy. It is deadly but uses only materials scavenged from the remains of their enemies….

To build this trap, sharp pieces of scavenged metal are jammed into the skulls of defeated enemies, allies and tribal members. Then the trapsmith attached a stout rope the prepared skulls and hauls a dozen or so up to their starting position. With that done, the skulls-on-a-rope are ready to swing down on their targets and wreak havoc.

Brave or expendable goblins will try to draw their foes into the 10-ft square area where the trap can be triggered. A DC 22 Sense Motive check determines the intent of the goblins.

Increasing the Deadliness
For goblins, putting filth upon the metal bits and parts is an easy and cost efficient method to increase the deadliness of the trap. The CR of the trap increases by one, if a hit exposes the targets to filth fever.

Art is by Tarol Hunt of the Goblins Web comic, and is used by permission.