Skip to content
Home / Delve into the Depths in the Kobold Blog / Bait & Switch: Mimics among Us 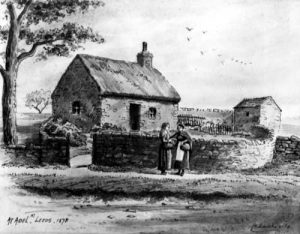 Mimics are among the most hazardous creatures an adventurer is likely to encounter. Surviving on trickery and cunning, instead of brute strength or raw magical power, the mimic inspires fear for its ability to fool and ensnare the unwary. Typically, you encounter a mimic on its own, proving little threat to an experienced adventuring group. However, the true threat comes from groups of mimics who work together to form communities. Such a group is terribly deadly, for they work together intelligently and create complex ruses flawlessly…

The cottage that moves is such a group. Led by a very large specimen simply called Big Mother, the group sets itself up in areas where travelers are likely to stumble upon the apparently abandoned cottage and rest for the night at which point the mimics attack the sleeping victims.

The cottage that moves is a group of mimics who have taken to turning themselves into various pieces of furniture in order to catch unwary victims. The largest of them, called Big Mother, turns itself into the cottage proper to house the other mimics. Beyond the five regular and one advanced mimic, they bring along a black iron stove and straw mattress to create a convincing ruse since mimics cannot duplicate texture and are not immune to fire.

(See the Pathfinder Roleplaying Game Bestiary for mimic stats. Listed below are the stats for Big Mother, an advanced mimic.)

TACTICS
Before Combat Big Mother shifts her mass into the form of a large cottage 20 ft. by 20 ft square. However, this shape puts a strain on the creature and reduces Big Mother’s reach to 5 ft.
During Combat Big Mother waits quietly like all of its kin for the prey to come close and enter the cottage. It generally lets its fellow mimics do the dirty work, but it grabs and holds any prey that come into contact with the floor, walls, and ceiling.
Morale Big Mother will fight to the death, knowing its large size and slow speed makes it impossible to run away if a fight goes badly.

SPECIAL ABILITIES
Adhesive (Ex) Big Mother exudes a thick slime that acts as a powerful adhesive, holding fast any creatures or items that touch it. An adhesive-covered mimic automatically grapples any creature it hits with its slam attack. Opponents so grappled cannot get free while Big Mother is alive without removing the adhesive first. A weapon that strikes an adhesive coated mimic is stuck fast unless (Reflex DC 21 to avoid; Strength DC 21 to pry off a stuck weapon; Strength-based). Strong alcohol or universal solvent dissolves the adhesive, but Big Mother can still grapple normally. Big Mother can dissolve its adhesive at will, and the substance breaks down 5 rounds after the creature dies.

Mimic Object (Ex) Big Mother can assume the general shape of any huge object, such as a small house, large boat, or big wagon. The creature cannot substantially alter its size, though. A mimic’s body is hard and has a rough texture, no matter what appearance it might present. A mimic gains a +20 racial bonus on Disguise checks when imitating an object in this manner.

Big mother has learned to shape itself into a small cottage 20 ft. on a side and 10 ft. high. This, however, reduces its combat ability and functions more to help fool and trap victims inside with its kin.

Disguise is always a class skill for a mimic.

6 thoughts on “Bait & Switch: Mimics among Us”