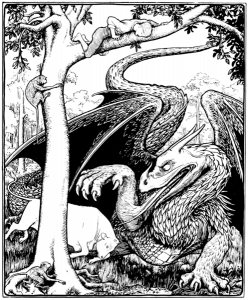 Dragons are huge, powerful creatures feared by one and all, but just as the mightiest human warrior can be laid low by the flu, so too can dragons contract, be weakened by, and even die from various diseases.

Hatchling Fever: While rare among dragons dwelling in either cold climates or dry, desert environments, hatchling fever is common among those in more temperate zones, especially in swamps, bogs, and other wetlands. Some sages point to the disease as to why there are not more dragons in the world.

The symptoms are unmistakable. Newly hatched dragons suddenly become listless a day or two after breaking out of their eggs. The abrupt exposure to the bacteria, viruses, and fungi outside the egg produces a fever that can kill entire broods. In desperation, dragon parents may kidnap clerics and other healers to help the hatchlings…

Curing a hatchling of the fever is a surefire way befriend a dragon, and they often reward healers most handsomely. In one such case, a copper dragon snatched up a paladin, whose friends immediately mounted a rescue attempt. However, by the time they arrived at the dragon’s lair, they found the paladin drinking expensive wine and swapping amusing riddles and limericks with the dragon. The now healthy and rough-and-tumble hatchlings wrestled each other about the lair, and the paladin was referred to warmly as “uncle.”

Unlike other draconic diseases, this disease combines multiple factors and is impossible to deliberately spread to hatchlings. Any wanderers and wayfarers attempting to do so or, for that matter, being anywhere near the hatchlings without explicit permission from their guardian can only be said to be committing suicide by dragon.