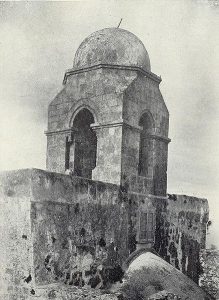 As you enter the abandoned monastery, you notice scrawled chalk markings covering the floor and walls. They all appear to be variations on the same obscure religious symbol. In the center of the room, next to a badly decayed corpse, is written the following:

“Beware the setting sun. Something comes from the forest. The monks’ wards are…”

The dark stain of the corpse’s lifeblood has, unfortunately, blotted out the rest of the message. Grasped in his right hand is clutched a piece of chalk; in the left is a small, leather-bound tome, propped open to a certain page by his decomposed thumb.

The rest of the monastery has been ransacked and vandalized. An overturned table has been crushed by a massive bookshelf. Altars lie empty of idols or holy symbols. Shutters wave open in the wind, revealing an orange orb just beginning to touch the western horizon.

If there is information to be gained, it must be done quickly…

A glance at the tome grants the reader Arcana, Nature, and Religion checks, each with an easy DC. With each success, an objective is gained. Due to time constraints, after these initial checks, each person can only make one check or assist in one check before the sun sets.

Once the sun sets, combat begins.

Arcana (Easy DC): The tome, through complex arcane symbols, depicts a process in which a crystal can be transformed into a fine powder. This powder is depicted cast upon a dark shadow, causing it to become solid. You see some materials spilling from under the fallen bookshelf; if there is anything of use, it would probably be under there. Someone needs to hold the bookshelf up while another crawls under to grab the materials.

Athletics (Difficult DC): You may attempt to lift the massive bookcase in order to give someone else a chance to search beneath.

Success—You lift the case, holding it aloft and revealing a variety of stones, powders, and mysterious substances spilling from broken jars. The following Arcana check is required to pick the correct one.

Failure—You cannot lift the case, it remains in place and you do not have access to what lies beneath.

Arcana (Moderate DC): With so many bottles broken, recognizing the materials involved is your only hope.

Failure—The mixtures and substances confuse you. You grab one after another but are unable to find the correct one. What’s more, when combat starts, you are still rummaging around under the shelf, which is being held aloft by your muscle-bound companion.

Nature (Easy DC): According to the writings, the creatures of the forest cannot abide by the smell of a particular variegated blue thyme, which the monks cultivated in a certain way. You spotted some of this in the overgrown garden outside, and somebody could quickly retrieve some before the sun has set.

Nature (Hard DC): The plant is there, but much of it has weakened; the effectiveness has been bred out when it mingled with wild varieties over the years. It takes some knowledge to find the oldest, purest of the plants.

Success—You find three handfuls of the plant, allowing three uses of oil of thyme. You return to your companions before the sun has completely set.

Failure—You search and search, only to look up to find you are too late. The sun has set and the darkness is upon you.

Religion (Easy DC): There is a certain symbol that can both weaken and enrage this enemy, and the monks knew it well. They reference it several times, but images of it have been destroyed, torn from the book. This Kyrian Kthariac styling of the Raven Queen’s most holy of insignias is an intricate, obscure symbol known only to the most knowledgeable of scholars.

Religion or History (Hard DC): You inscribe this obscure symbol on the ground.

Success—You flawlessly inscribe the symbol of the raven on three squares, anywhere on the map.

Failure—You instead spend your time scrawling nonsense and imperfect representations. They will have no effect once combat starts. When the sun sets, you are just finishing the third inscription.

The Creatures: The attacking creatures, whatever they may be, gain the following traits in addition to what they already have:

The Advantages: Success in the challenge yields the following advantages during the combat.

Powder of Shadow’s Remorse (×3)—Throw this powder into the air. Any insubstantial creatures contained within a blast 5 are rendered substantial (save ends).

Oil of Thyme (×3)—Rub this on yourself as a minor action. Until the end of the encounter, any enemy adjacent to you cannot teleport.

Symbol of the Raven—Successfully inscribed upon the floor, this symbol causes the creatures to become weakened whenever standing on it or an adjacent square.