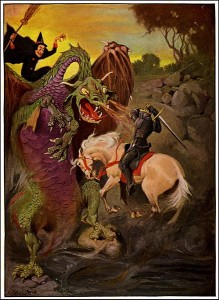 Dragons are huge, powerful creatures feared by one and all, but just as the mightiest human warrior can be laid low by the flu, so too can dragons contract, be weakened by, and even die from various diseases. What follows is a description of some—but by no means all—of the maladies and draco-disorders afflicting the great reptilian race…

Halitosis: In humans, halitosis is simply bad breath, but among dragons, it means loss of your breath weapon. In such cases, a dragon’s throat is infected by a rare fungus generally found deep underground. It is usually triggered when the dragon devours a creature or item carrying the spores. Adventurers have been known to deliberately infect dragons with halitosis by leaving tainted food near the lairs. So deprived of its fearsome breath weapon, the dragon is much more vulnerable to ambush…

This technique can also be used as a ruse, so an adventuring party can arrive and cure a dragon, thus gaining its confidence. If such a deception comes to light, however, merciless vengeance is all any party can expect. It bears repeating that a dragon is a highly intelligent creature and will look with a jaundiced eye on any mouthwatering delicacies placed within too easy reach. It knows this would not be the first time poison had been tried to rid a hoard of its guardian. Care and forethought must be taken in such an attempt. Otherwise, the wily wyrm may only pretend to go along with the gag to see who or what turns up.

As for the fungus itself, it grows into and actually becomes part of the dragon’s throat. In the early stages, a dragon may still use its breath weapon but only at half strength and each use damages the dragon, too (3d6+2 hp per use)—it runs the risk of literally blowing its own head off. The dragon loses its breath weapon entirely after about a month (1d4+3 weeks). Only the breath weapon is affected (regardless of type of breath weapon), and the dragon can still speak and cast spells.

Dragon halitosis can be used as an effective double-whammy adventure. For example, the PCs have recovered a fell weapon or cursed magic item that must be destroyed, but only the breath weapon of a certain type of dragon can do the job. The PCs search out such a dragon only to find it suffering from halitosis and, so, breathless. Now, they must go on yet another adventure to cure the dragon and fulfill their original adventure.

Loss of its breath weapon is devastating to a dragon: it is a primary and signature weapon. If PCs cure the halitosis, the dragon will be profoundly grateful and agree to place its breath weapon at the PCs service for a limited time or limited number of uses (1d4 days or uses).