Skip to content
Home / Delve into the Depths in the Kobold Blog / Book Review: Desert Moon 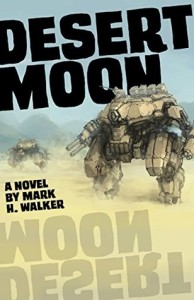 The year is 2341, and Earth has formed a multi-planet confederation. As part of this confederation, Earth is now known as Terra and they have a defense force known as the Terran Defense Force (or TDF). The TDF consists of modern weapons including power-armored tanks and vehicles, which are called CATs. Most of these are manned by genetically engineered troops called Purebreds. These troops are made to be faster, smarter, and bigger than normal humans. Combined with this arsenal of equipment and super soldiers are the Assassins. Surpassing even the Purebreds, the Assassins are faster and stronger, and they have their sense enhanced past their peers. Oh, and there is one other catch: They are vampires. Their need for blood drives them to be some of the most feared killers in the confederation. The only weakness these vampires have is that they crave blood; stakes, garlic, and sunlight mean nothing to them unless the garlic is on bread—then they will eat it.

Sediana, the setting for the novel, is the future’s version of a Native American reservation, and it has vast amounts of bauxite, which is a key component in the manufacturing of things like space ships. The TDF wants to protect the resource, but the locals are getting restless and they have just found an ancient stash of M1A4 Abrams tanks, Bradley IFVs, M-4 carbines, and attack helicopters.

Desert Moon is much more involved than your typical military sci-fi book. Just by the description you can see that there is much more going on than in your usual novel of this genre. I wouldn’t call Desert Moon overly ambitious, but I think the latter part of the novel suffered due to all of the subplots that needed to be resolved. Walker held on to a good grasp of the military aspects of this novel until the end, then he dropped the reins. Rein-dropping aside, there is some really good stuff going on in Desert Moon.

Few science fiction fans don’t like big giant robots festooned with machine guns, lasers, Gauss rifles, and missiles. Desert Moon has plenty of these. I enjoyed the fact that even though these CATS were big and powerful, they were not indestructible. Too often I see authors who love mechs show that love by making them only vulnerable to other mechs. The mechs or CATS got just enough “screen time,” and I enjoyed the variation in the styles and functions of those mechs. There was nothing innovative with the mechs, but it is always interesting to see each author’s take on them.

The idea of Assassins that are vampiric is genius, and, actually, I think vampiric is a better word than vampires. What a great way to motivate someone to kill someone else—these Assassins don’t need the blood to survive, but the consumption of it enhances their abilities. Like the mechs, the vampiric Assassins were not overplayed, and there was a really interesting mini-mystery involving the identity of one of them. TDF SOP generally places at least one Assassin in a theater of operations, and on Sediana there are two. One is trying to escape her life as an Assassin, and one doesn’t know about being an Assassin. It isn’t as confusing as it sounds.

One small yet significant part of this book that was done well was the rationale for the complete lack of starship combat in Walker’s universe. The simple answer is it is too damn expensive. None of the sides in the last war were willing to attack each other’s capitol ships because they cost too much and take too much time to make. This might sound weird, but it really makes sense. I have a feeling that Walker didn’t want to get involved in writing ship-on-ship combat to keep the focus on the activities that were occurring on the desert moon of Sediana. The cost of this type of combat was a simple, elegant, and brilliant way to keep the focus where it needed to be.

Walker got many things right in Desert Moon, but toward the end of the story, a few holes that had been there all along showed themselves. This book takes place in the year 2341, which is far into the future: if the advances in current technology keep multiplying the way that they are currently, even with major conflicts, Walker was way behind the power curve. I think if he had set it in a not-so-distant future, his ideas and technology would have passed the common sense test much easier. Here is an example of what I mean: Over three hundred years from now, would we see a Mech/CAT still mount a 25mm gun? I understand that Desert Moon isn’t a novel about technology, but Walker seemed to avoid the subject to the point where things just didn’t make sense.

The most disappointing parts of this novel, however, were the editing, inconsistencies, and stilted interactions between the characters. I understand, love, and respect small authors, but what with spacing issues, missing words, or improper words being used, the editing on this book was marginal at best. These errors were not nearly as rampant as I’ve seen in other books, but they were noticeable. Next came the inconsistencies. Several times during the course of reading this book, I got confused. For example, at one point a rifle was listed as a .303 caliber rifle, then it or another rifle was listed as 3006 and 30-06. For people not interested in guns, this isn’t a big deal, but to a majority of readers of military science fiction, it is.

Also, there is no crying in guerilla warfare, unless you are a character in Desert Moon. I lost count of how many times characters teared up in this novel. I understand using tears to emphasize an emotion, but after the fifth or sixth time, all emphasis is completely lost so it turned into a big joke. Combine the excessive crying with several of the characters questioning if it is right to genetically manipulate people and you have the cheesy undertone of social commentary. These are two things that fell into the overcomplicated category I mentioned above. Additionally, most of the noncombat interactions between the characters felt forced, as if they were reading in monotone voices from cue cards.

If you are not picky about military accuracy or character dialogue, then the things I pointed out shouldn’t bother you. If you are interested in those types of things, then Desert Moon will be much more difficult for you to read. The concept is great, and the idea of mechs and vampiric Assassins running around on a reservation moon full of angry tribal folks who trace their ancestry back to the Native American tribes of North America has such potential. Walker is a good writer and will get better as he goes. He needs to find a top-shelf editor, and he needs a few technical advisors to keep him on track. I feel like he got worn down toward the end of the novel and made mistakes I didn’t expect from him. Desert Moon has potential, and I feel that if Walker is willing to do some additional editing and a little retconning, this story will shine.