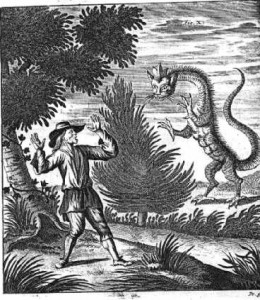 The following is a translation from the chapter “Maladies and those Diseases Besetting and Afflicting the Greater and Lesser Wyrms” from Vol. III of the eight-volume set Wyrms of the Modern and Ancient Wyrld by Lohik Aarme the Elder with contributions and annotations by Lohik Aarme the Younger as found in the Great Library of the Five Fiefdoms of South Norry…

OK! Fine! Enough! Why are the ancient sages always so longwinded? On with it…

Dragons are huge, powerful creatures feared by one and all, but just as the mightiest human warrior can be laid low by the flu, so too can dragons contract, be weakened by, and even die from various diseases. What follows is a description of some, but by no means all, of the maladies and draco-disorders afflicting the great reptilian race…

GMs can use the diseases as equalizers. That is, leveling the playing field by toning down some of the dragon’s fearsome weapons to make battles between the dragon and PCs less one-sided.

However, the PCs may use the diseases themselves, deliberately infecting a dragon to gain an advantage. They may also cure the dragon for rich reward or bring it into the campaign as an NPC, ally, or advisor. Cures for the maladies are left to the GM’s discretion, depending on campaign requirements. If the GM needs an adventure hook, the cure may require PCs to undergo a dangerous quest to gather rare and arcane ingredients for a potion.

If the GM needs the adventurers to gain a powerful ally quickly, the malady may be overcome by a simple curative spell or using a potion that the PCs have already obtained. After all, use of a friendly dragon’s lair offers a PC party a safe haven in otherwise hostile territory.

Alternatively, a cured dragon may allow PCs to choose an item from its trove (that’s one item for the entire party, not one item for each PC, the dragon is grateful not dimwitted). However, there are said to be many arcane and powerful items in a dragon’s hoard if only half the tales be true. In fact, GMs may offer the choice from the hoard so that PCs may obtain an item necessary for to complete another adventure.

The Maladies of Dragons

Dementia: Dracodementia is the result of the dragon’s long, long life. The weight of century upon century of memories and endless, solitary brooding in the lair can unhinge the most stable of mentalities.

One notable effect of dementia is that the dragon is left spellbound. As the afflicted dragon attempts to cast a spell, all spells the dragon knows suddenly rush though its mind causing either spell failure (90%) or the casting of a useless or completely inappropriate spell (10%). However, other than spellcasting, the dragon suffers no other combat penalties.

The dementia is also unpredictable. The dragon may go from dreamy reminiscences of lost loves and past victories to crystal clear lucidity in a moment, so politeness, honesty, and respect must be maintained at all times. Otherwise, PCs may suddenly find themselves out on their ear.

A tale tells of pirates who convinced an ancient and addlepated black dragon that they were sent by her children to move her and all her treasure to a place of superior safety. The befuddled old girl was helping the pirates load treasure aboard the ship when her mind cleared. For years afterward, the pirate ship stood broken and beached with the skeletons of her crew dangling in the rotting sails and rigging as mute warning to the vagaries of dracodementia.

On the other hand, such a dragon is an effective and fun NPC for the PCs and GM alike. The GM can use it for dispensing history and arcane lore. As the dragon wanders in its wits, it may ramble on and relate the histories of kingdoms, castles, and creatures of long ago. The GM may either roleplay or allow the PCs to read the pertinent information from game notes, monster manuals, sourcebooks, and so on. As far as the PCs are concerned, such an afflicted dragon is a font of information better than any library.

If PCs cure the dragon, they may soon regret it. The dragon will be forthcoming with some information out of gratitude but will no longer ramble on witlessly and will soon start demanding payment for its knowledge. However, once paid, the dragon will stay “on topic” and not go wandering aimlessly through the years or digress to irrelevant side issues.