Skip to content
Home / Delve into the Depths in the Kobold Blog / Real Steel: The Kiridashi Assassin Bug 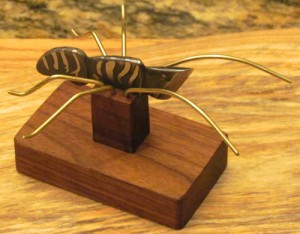 The kiridashi is an interesting study. Its original function, probably going back several centuries, was to mark wood. Japanese carpenters still use them today instead of marking pencils. In the form used for their original purpose, the kiridashi is long, slender, and simple. Although there is a sharp edge, the emphasis is on the point, because the knife is held and used like a pencil.

For a knife geek, the original form is interesting enough to warrant some attention, but the kiridashi has undergone enough modern modification and development to be interesting to almost anyone who uses knives.

A traditional kiridashi has two fairly unique features that make it very good at its intended purpose. The edge is oriented more towards the front than most knives, and it has what is called a chisel grind. This simply means that there is a bevel on only one side of the blade. As we have discussed before, everything in bladesmithing is a trade-off; to get a particular advantage, the smith usually has to accept a weakness. Chisel grinds gain the advantage of being extremely sharp because the edge can be made extraordinarily thin. This sharpness can be enhanced further by using a hollow grind, which makes the edge even thinner. As an example, straight razors typically have a hollow chisel grind. For the kiridashi, the payback for that incredible sharpness is doubled; the thin blade is fragile, which is expected, but the knife is also “handed,” meaning that it is intended to be used by either a right or left handed person depending on which side the bevel is located.

Popular knife culture has seized on this knife, and it has become something more…

What It Is Now 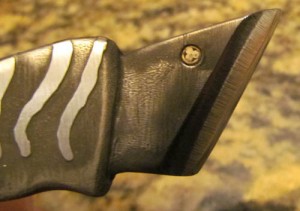 Knifemakers and bladesmiths have made as many versions of this knife as there are makers and smiths. There are traditional, tactical, utility, hunter, and skinner kiridashi. In my opinion, these knives excel at only two categories: marking and general utility. I’ve included a picture of some of the kiridashi I use in my shop and around the house alongside the featured piece for comparison. I really like these knives in their utility capacity: box cutters; string, rope, and wire cutters; I even use them to mark metal and carve wood. I love the general form so much I wanted to do a pure fantasy art piece just for KQ.

This little knife was made from 1084 carbon steel. I didn’t do a sketch or make a mock up from wood or Plexiglas as I usually do when designing a new knife. I simply band sawed a piece off the bar and went to the belt grinder. No fancy hand tools and no finesse. I just let the metal tell me what it wanted to be, and I ground away everything that didn’t belong. After the general shape was right and the edge bevel ground, I used my drill press to make the eyehole. Hardening and tempering came next, and then I painted the stripe pattern with a resist and gave it a long bath in ferric chloride. I then inserted the brass-mosaic-pin compound “eye” and ground it flush. The stand is made from black walnut (sorry if it’s weak, I’m not a woodworker…) and the legs are brass pins. DONE! 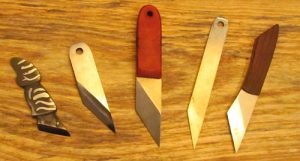 I’d love for this knife to be gamed up. At this point, I hand it over to the game writers and players to receive appropriate stats and uses. I see it as a golem like non-intelligent construct or perhaps as an artificial life form, either individual with animal intelligence or in a hive with the appropriate hive intelligence.

In fact, email web editor Scott—scott[at]koboldquarterly[dot]com—your statted “death bug” as whatever kind of monster or item (of any edition) that you want by March 1, and the best one will be posted.

Have fun with it!