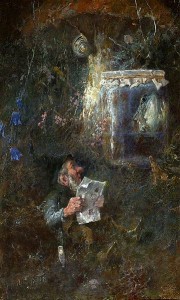 One of the Gold-ENnie bloggers at Gnome Stew, Martin Ralya, has written a guest blog post for Kobold Press. You can read what he has to say about short campaigns and give some thought as to how you’d implement such a campaign at your own table—or jump in with comments on your own experiences running short campaigns.

Campaigns come in all shapes and sizes, but especially all lengths. Depending on how you got your start as a gamer, you may hear the word “campaign” and immediately think of years-long games that grew and continued for hundreds of sessions, but in my experience those campaigns are few and far between.

The older I get, and the older my gaming buddies get, the more less free time we have and the more likely we are to run and play shorter campaigns. I have two gaming groups right now: one that meets face to face and one that meets online. Both have different default approaches to campaigns. The in-person group has, after many years gaming together, found that our sweet spot is one-year campaigns with an “option to continue” (kind of like signing a lease). The Google Hangout group switches games every few sessions; arguably, we don’t play campaigns at all (or at least we haven’t yet).

Both experiences are immensely satisfying, which is important to note: There’s no wrong way to approach campaigns. As long as it works for you and your group, rock on.

But short campaigns don’t always get the good press they deserve. A short campaign might last for a few adventures, a handful of story arcs, several months, or a year or two—”short” is, like most things, relative. But part of what makes short campaigns hum is planning.

Why? Because if you don’t plan ahead, someone is likely to be disappointed. Case in point: My in-person group recently played a fantastic Marvel Heroic Roleplaying campaign that the GM cut short before the players were ready to end it. As a player, my impression going in was that we’d play for a year or so, but after a handful of (great) sessions, the GM said he was wrapping things up in the next few sessions.

If I’d known that going in, I might have paced my character’s development differently, roleplayed her connections to the other PCs differently, or accelerated any number of things about how I was approaching the game. A campaign with an announced endpoint in the near future feels different than one you think is going to end at some nebulous point down the line, when everyone is good and ready.

So whether you’re thinking about running a short campaign to test out a new game system with your group, because a player is moving away in a few months, because you’re not sure how you’ll take to the game as a GM, or for any other reason, the most important thing you can do up front is set clear expectations. Make sure everyone in the group knows the campaign will be short, and what “short” means in this specific case.

If you want a safety valve, include the option to extend the campaign at the outset. It’s as simple as saying, “If we’re all having a blast in six months, I’ll end the first story arc and start up a new one.” If you need a break in between “segments” of a short campaign, plan that up front as well if at all possible. (Breaks are great for retooling characters, fixing things that could have gone better, and changing things up in general.)

After your short campaign is up and running, relish it: There’s a freedom to knowing you don’t have forever to pack in all the awesome stuff everyone is interested in seeing and experiencing, and you can skip the boring crap and focus on the cool things. If you know you’re going to play only 5 or 10 or 15 sessions, pick the 5 or 10 or 15 coolest things you can think of and make the game about those things.

Spotlight time for the PCs in short campaigns works in much the same way, and with the same benefits. Make sure you create adventures that revolve around each PC, or around ideas your players suggest or request, or both. With less time in which to shine, every PC needs the chance to shine at his or her brightest.

Experiment, too—and don’t be afraid to make mistakes. Try wild-ass things you’ve always been afraid to try, or that you think you’ll suck at, secure in the knowledge that you’re not going to torpedo a game that’s been running continuously since 1974. On the flipside, though, don’t experiment in every session; put in some bread and butter, too (remembering to focus on the coolest things you can think of, and on the PCs, even in the bread and butter sessions).

Short campaigns burn hot and bright, they’re memorable—often indelibly so—and they’re a lot of fun. If you’ve never tried running a short campaign, or a campaign with a defined endpoint (however loosely it might be defined), or either, I encourage you to do so. It won’t be a great fit for every group, but my guess is that if you’ve read this far, you have a hunch as to whether it might be a good fit for yours.