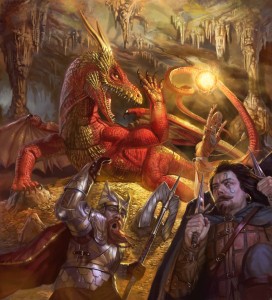 It’s not actually that difficult to create magic items if you have the knowledge, experience, and base materials. The Wyrmforgers are something else entirely; a small enclave based high in the mountains, they work with metallic and Imperial dragons to use the magical powers of these creatures while forging the tools intended to be given to heroes who advance the causes of good (or at least an acceptable degree of multiversal balance). Short of the gods themselves, the Wyrmforgers are some of the greatest artisans and creators of enchanted items to be found. Many of the younger ones embark on a quest to find a rare material to bring home and use, but the forces of evil are always watchful and looking for ways to disrupt the creation of such potent artifacts.

The Fangs of Drammunak are an elite order of battle-hardened wizards who tap into draconic magic as part of their servitude to the black-hued Great Wyrm who gave their group his name. Drammunak rarely travels unless called for, and instead he is content to give orders from behind the scenes and teach his minions how to tap into draconic knowledge and power. The Fangs are a lawful evil group, well-trained and disciplined so that they can effectively assault towns and cities while butchering anyone who doesn’t kneel before them. Their rule is harsh, their punishments worse, and they’re not above melting hundreds of people in pools of acid to make a statement. Heroes should beware, because Drammunak isn’t entirely against showing himself if one of his chief officers calls for his aid, though the Great Wyrm expects fantastic offerings and sacrifices in return for his effort on their behalf.

Unlike many evil groups, however, the Fangs of Drammunak aren’t particularly looking to invade other kingdoms. Too much notice could easily draw the ire of entire nations, so they prefer to expand away from other centers of power and consolidate their might.

Of all the many monsters that inhabit the planes, none are quite as notable as the dragon. Good, evil, or even uncaring, these majestic monsters always have an impact on the lands around them, but that impact is even more notable when it’s deliberate. The Dragon-Blessed are a cadre of warriors who have studied under relatively friendly primal dragons and learned great magical powers to complement their warrior’s ways. However, they’re also a little, well, crazy. Dragons are used to solving problems with raw power, and this carries across to the Dragon-Blessed, who tend to behave however they want as they greedily gather valuable things to themselves. Most Dragon-Blessed are affiliated with a particular type of primal dragon and have a fondness for magic items that have similar powers, so they’ll often go to great lengths to track these items down and add them to their growing hoard.