Skip to content
Home / Delve into the Depths in the Kobold Blog / D&D’s 40th Anniversary: Words to Celebrate, Part Three 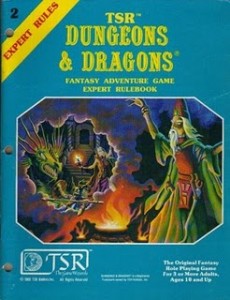 It’s hard to believe that Dungeons & Dragons is celebrating its 40th anniversary this week! To help commemorate this most glorious occasion, we asked several folk who are working in or who have worked in the RPG industry to share their memories of the game with us. Due to more such folk wishing to share their memories, we have another part to this series. Behold!

Steve: Um…technically, AD&D 1st Edition, because our Gamma World characters arrived via Dimensional Portal in the Hidden Shrine of Tamoachan, fought our way out of the dungeon, and found ourselves stranded on Greyhawk and… What…? We’d run out of Gamma World modules!

Steve: The modules with art booklets, where you could turn to players and say, “You see THIS!” [holds up picture] That stuff was great.

Steve: Well its quirkiest thing was its sheer quirkiness, if that makes any sense: AD&D, while quite the development from the original edition of the game, still had all of these rough edges and illogical little quirks (negative AC, anyone?) and subsystems, and adventures and artwork that were like snapshots of a bigger picture that was only inferred, and yet it fired the imaginations of so many precisely because of all of those quirky, implied spaces.

Steve: Define “fantasy” … I’m running a D&D Next game right now (Ghosts of Dragonspear Castle) and playing in a Shadowrun 4th edition game, which is a flavor of fantasy. In fact, it’s kind of the whole “D&D Meets Cyberpunk” thing that makes Shadowrun really sing.

Bill: I discovered the D&D game in a secluded corner of Polk’s Hobbies sometime in 1977. I don’t know if it was the intriguing blue box or the evocative name, but something drew me in and we quickly became fast friends.

Bill: A combination of things stand out in my memory from those early days. The dungeon maps fascinated me, and I think I wore out the Wandering Monster Table running my first adventures (even though it included monsters that weren’t detailed anywhere in the product!). Put it all together, and my favorite thing about those earliest days of play was the sense of wonder and the excitement that the whole package invoked. It really inspired me!

Bill: The Blue Box was quickly followed by the AD&D Monster Manual and the AD&D Player’s Handbook (hard-cover books!). I don’t remember if we realized the box and the books were different games, but so much of the terminology and presentation were similar that we used the books interchangeably—which led to some interesting “discussions” between me (as the DM) and my players (who were learning the fine art of rules lawyering). It was all named D&D, and we immediately blurred the lines between “Basic” and “Advanced” in my gaming group. Another thing that stands out is how the idea of a “universal” game mechanic was still years away, so remembering when we needed to roll high and when we needed to roll low always sent us back to the books for a ruling. Maybe that was the most fun I had—adjudicating actions using the rules, or making up my own rules when I didn’t like or couldn’t find an appropriate passage in the books.

Bill: Well, my current day job involves writing for the upcoming Elder Scrolls Online game, so that really constitutes the bulk of my fantasy RPG-ing. However, I’ve toyed around with a couple of new rules systems of my own design, which I’ve run for friends at Ed Stark’s most-recent JAT-CONs (private gaming weekends for friends and family). And I’ve been running a little bit of D&D Next to help one of the editors of the new edition become familiar with the new game play. But I wish there were more opportunities to roll dice and roleplay around a table these days.

Ed: I got one of those old, blue-box basic sets as a gift, one of the ones that had cardboard counters in the box instead of dice. A friend saw me reading the book in school and asked if I played. I said I hadn’t, but wanted to. He came over that weekend and brought a 1st Edition DMG, so we played both Basic and 1st Edition until we got hold of the rest of the books.

Ed:I loved the cartoons in the margins of the DMG. They made me laugh and imagine characters I’d never created getting into those silly situations.

Ed: I guess the lack of illustrations for certain weapons and monsters we “encountered.” Remember, we were playing out of just the basic set and the DMG, so we had no idea what a Lucern hammer looked like (“Imagine my surprise when I found out it was a pole arm!”) and we made up descriptions for weird, but level-appropriate monsters we’d never heard of before.

Ed: I hop around a lot. I’m working on the Elder Scrolls Online, but that’s an MMO, so I’m not sure it counts for your question. I’ve been playing some D&D recently (edition unnamed), and I’ve been running some home-brew games that combine D&D with more skill-based systems. I’ve become very eclectic in my tastes, grabbing mythology and rules from anything that appeals.