Skip to content
Home / Delve into the Depths in the Kobold Blog / Dirty Jobs: Brewer 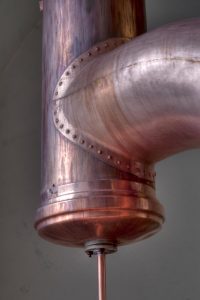 “Do you want the job or not? You got pretty good qualifications, but I won’t lie to you—there’s a lot of guys just as qualified right behind you.”

Jerfren had, in fact, lied at least three times already in their short conversation. Merippik had been counting

The first lie was that the job paid well. It didn’t. But that lie was irrelevant because no job that a lone forest gnome could find in this great dirty city paid well. The second lie was about the quality of the equipment. It was visible through a window on the side of the office. The vats, boilers, and gauges may have been adequate once, but they were never well made, and they had not been treated well. The third lie was that Jerfren made a respectable product. He didn’t. He made beer that was barely distinguishable from what happened after you drank beer.

But it was true that Merippik needed work badly. Wizard’s college was expensive, and the few gems he had come into the city with were long gone. Taking work here would mean spending eighty hours every ten day making beer, in addition to the hundred hours he spent in class or in the lab. That would leave six hours of sleep every night. Realistically though, he still had to eat, bathe, and walk to work, so the actual number would probably be more like four hours.

But this was how he could pay his tuition. It was work here or go back to the forest.

“Great.” Jerfren couldn’t suppress a small sigh of relief. “You start today. Get to work.”

Merripik scanned the filthy brewery with distaste and resigned determination. The pursuit of magic had cost him everything he possessed. Now, it would cost him every minute of every day. If he spent long enough without sleep, it might cost him his mind. He flexed his fingers and thought back to Creative Thaumaturgy with Professor Clayborne. Maybe, there was a way he could arrange it so that magic would stop costing and start paying…

This spell creates 5 mindless, shapeless forces. Each one has a Strength of 10, an AC of 10, and 1 hit point. When given the command word, each one will watch up to 5 seconds of the caster’s body motion. The force will then repeat that motion over and over again until the end of the spell. Once the pattern is set, no alterations can be made, so for instance, it cannot pick up each bottle from a crate, but will instead reach to the position of the first bottle again and again. If instructed to swing a hammer at a wall, it will continue swinging into the same space, even if the wall falls down. The 5 forces can be given different, interlinked motions to accomplish more complex jobs but careful thought must be put into their timing and positioning.

“I need to bottle, label, and pack a thousand bottles of beer, I need to write a spell for class tomorrow, and I need to sleep for eight hours. I may actually be able to do all of those things at the same time.”

You transform a small percentage of a target creature’s blood into ethanol, making it instantly and devastatingly drunk. The target may make a Constitution save. If they fail, their speed is reduced to half, and they have disadvantage on all attack rolls, saving throws, and ability checks. If they succeed, they suffer disadvantage to ability checks. During its turn, the affected creature may make a Constitution save to shake off the effects of the spell. If they succeed, they may act without penalty that turn.

Merippik used this spell to keep his employer distracted, but the students at the wizards college found others uses for it.

Characters or creatures who have never consumed alcohol are immune to this spell.

“You thumb-fingered, little dandelion eater! This batch is useless. It’s got about as much kick as a one legged mule.”

Separate causes all the parts of a mixture to form into discrete groups and stay apart until the end of the spell. The process takes 4 rounds and can affect up to 10 gallons of water, 1 gallon of liquid metal or exotic chemicals, and up to 1,000 cubic feet of gas (a 10 × 10 × 10 cube). After the different parts of the mixture separate, they will stay that way as long as the caster concentrates, up to a maximum of 10 minutes.

This spell also works on blood and other body fluids. The target of the spell must make a Constitution save. They take 2d4 Necrotic damage, or half as much on a failed save. The caster may repeat this attack on the same target every round for 4 rounds, as long as they maintain concentration.

Merippik first used this spell to remove impurities from the water he used for beer. Wizards have since used it to make fresh water from salt water, to purify alchemical components, and to test the concentration of precious metals in various currencies.

“Get out of my brewery, you vandal, or I will reduce you to your component parts.

Sigh. “Do you realize you are about to die as a result of a poorly developed vocabulary? Leave now. Last chance.”