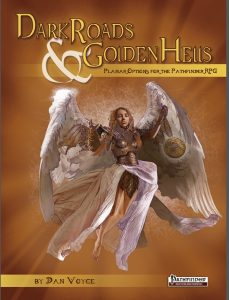 “Dark Roads & Golden Hells is one hell of an achievement… or perhaps eleven of them. Every chapter offers a world of ideas, every paragraph a vision. Open this to any page, and see if it doesn’t draw you in. Open Design has created a dazzlingly worthy successor to the Planescape legacy.”

Open Design’s new sourcebook of planar adventure for the Pathfinder Roleplaying Game has been forged and polished to gleaming, smoldering perfection and is ready be unleashed on the Prime Material Plane! You can pick it up in the Kobold Store in print+PDF or PDF only.

Dan Voyce (Northlands) has delivered a glittering array of new planar options for GMs including: