Skip to content
Home / Delve into the Depths in the Kobold Blog / Midgard Icons: The Oracle of Kammae 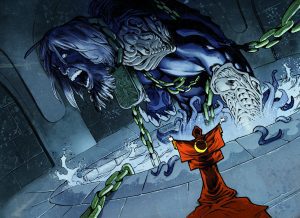 In our 10th and final installment, we enter a mysterious temple where, through fogs of incense, we hear the rattle of giant chains…

The blind daughter of the moon is blessed — or cursed — with divine insight, and gifts of healing and prophecy. With the voices of spirits, angels, and canny counselors around her, the Oracle of Kammae Straboli rarely errs in matters of fact or faith.

“Go seven leagues to the North, to where jeweled wings beat against a blackened wall. Search among the rocks at nightfall for the hidden key — but beware the one who walks behind.”

In the Hall of the Oracle in Kammae Straboli, adjoining the Great Gold and Silver Temple of the Three Goddesses: Hecate the Moon Goddess, Rava the Weaver of Fate, and Lada the Golden.

The Oracle of Kammae keeps her people safe and expects no thanks and little reward; but she treasures the few quiet hours each month when she stands with her sisters to await the new moon, before the cycle of rituals begins anew. The Oracle holds sessions for her most favored heroes and the wealthiest donors during the three days of each full moon. She traditionally sits on the ivory stairs at the center of the Great Gold and Silver Temple when receiving visions.

Entering the Hall of the Oracle is like stepping into a higher realm. The halls are heavily gilded and lit by magical lights that dim only at the new moon. Its altars are redolent of fresh flowers in summer and rich incense and lavender in winter. Tiled floors feature beautiful mosaics of fantastic creatures, enigmatic scenes laden with hermetic symbolism, and depictions of the Three Goddesses. Oracles and seers walk to and fro, lost in thought or energetically debating matters of divination and prophecy, while dream drakes look down from their high perches.

The Temple’s inquisitors and paladins are members of a divine order called the Eyeless, answerable only to the Oracle, the gods, or their messengers. Their symbol is a sightless white eye, and they are both loved and feared among the people. Their elite training and zealous streak makes them dangerous to those they consider enemies of the Temple or the Oracle, though some few are corrupt. Their leader is a man named Lygren Ullos, the Dark Eye of the Moon.

As befits an icon who holds a god prisoner, the Oracle of Kammae’s quests often attract the attention of divine powers — or challenge them directly. Adventurers might battle monsters from the dawn of time, trade riddles with an immortal shrine guardian, or call forth a forgotten deity in a ruined temple. But the Oracle is also a head of state, with very real earthly concerns. She may need adventurers for missions against a rival city-state, or she may need outsiders to investigate corruption among her priests and oracles.

The Oracle of Kammae gained much when she chained Nethus, but she also lost many of her allies. Among these allies, the Oracle has a strong mystical connection to Baba Yaga through the mysteries of the Moon Goddess.

The Dragon Sultana’s Mharoti empire represents a grave threat to Kammae and the rest of the Seven Cities. The Queen of Night and Magic is the Oracle’s rival for the adoration of those who revere shadow and the arcane; and she maintains a long-standing feud with First Duke-Admiral Cadua of Triolo over the chaining of Nethus.

Like many of her sisters in the Great Gold and Silver Temple, Yeneva Podella was an orphan raised in the faith—but her gifts shone through from an early age. She would often startle visitors with detailed knowledge of events in distant realms, or deeds done in secret. Her predictions of the future were unerring, though sometimes they took time and effort to interpret. Word of the young girl’s talents spread, and her influence quickly grew as she became indispensable to the wealthy and powerful of Kammae Straboli.

Yeneva’s divinely-granted knowledge of things to come gave her the serenity–and ruthlessness–of absolute confidence in the rightness of her actions. Before she was 40 years old Yeneva had gone from advising the city’s rulers to ruling Kammae as its Oracle.

Fifteen years ago the Oracle’s soldiers attacked and kidnapped the sea god Nethus, magically chaining him as a prisoner. Today the Temple of Nethus in Kammae is guarded at all times by minotaurs with axes and inquisitors with questions for those who pass by too closely. The interior is not open to worshipers, and the god’s name is rarely spoken. Oracles, priests of the Moon Goddess, and privileged visitors can speak to the god through magical means, receiving divine blessings, power, and information.

Despite such protections, some have found their own ways into the temple. The huginn seer-poet and adventurer Drouin “Croak-eye” Stroud, known as the Songraven, is nicknamed the “Rascal of Kammae” because he talked his way past the jailers of Nethus to trade secrets with the chained god.

The battle that enslaved and chained Nethus inflicted other casualties, most of all the sea god’s wife Mnemosyne. The Kammaen inquisitors removed from her mind any trace of their crime or the methods they used to capture Nethus. They also cursed the handmaidens and servants who sought to protect her into horrid forms. Now they travel throughout Midgard in disguise, seeking the details of Nethus’s capture in hopes of restoring the memories of their queen.

Everything will be all right (for the Oracle, at least) as long as Mnemosyne never succeeds in freeing Nethus. If she does, the wrath of the sea god toward the Oracle and her people will be mighty indeed.

6 thoughts on “Midgard Icons: The Oracle of Kammae”