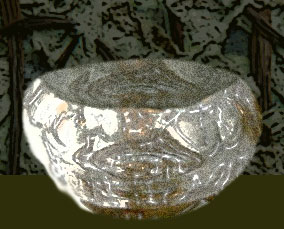 Constructed by the elf witch Azria Dwin’dardae from dozens of fist-sized diamonds, this ornate cauldron glows with a warm orange light when filled with liquid of any sort. Those who find the secret to claiming ownership over it can enjoy a variety of benefits.

Amplify Elixir: An imbiber of a potion crafted in the crystal cauldron can gain the effects of an amplify elixir extract for this potion by whispering “crystal cauldron” in Elven (as a free action) before imbibing the potion. This effect does not apply to the crystal elixir described below, and the drinker of the potion must be on the same plane as the cauldron.

Cauldron of Brewing: The crystal cauldron acts as a cauldron of brewing, granting a +5 competence bonus to Craft (alchemy).

Crystal Elixir: Once per week, by touching the cauldron and then speaking the name of a chosen spell in Elven (a standard action), the crystal cauldron can create a single potion (caster level 20) without cost or any required components. The spell named must be of a spell that normally could be made into a potion, and the cauldron must start out empty. Once the potion is created, it must be transferred from the cauldron to an empty vial or flask (a standard action) within 1 round or the potion loses all its potency. Only one such potion can exist at a time, and if the crystal cauldron makes another such potion before an existing potion is used, the previous potion becomes inert and nonmagical.

Hex Use: While within contact with the crystal cauldron, the cauldron’s owner has access to one of the following hexes as if he or she were a 20th-level witch: cauldron, poison steep, cook people, witch’s brew.

Potion Creation: When used to brew potions, the crystal cauldron allows for the creation of potions in half the normal time. (If a character can already decrease the creation time, this benefit does not apply.)