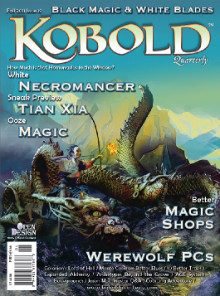 Kobold Quarterly issue #19 is out today, and this Kobold horn of plenty is overflowing with what might be our most diverse set of articles and columns ever.

But in this issue we go where no kobold has gone before: the realm of indie games, where we interview Fiasco designer Jason Morningstar. We asked Jason how the interview went, and he said, “I enjoy my subscription to Kobold Quarterly and was thrilled to get my (monkey) brain picked about games and game design for this issue.” This is nice of him to say, considering that at the end of the interview we challenged him to escape a deadly trap. Because we’re still kobolds, right?

Kobold Quarterly #19 is available now in print and PDF with necromancers, werewolves, grave druids, arch-devils, and a new solo adventure. Here’s a look at what’s inside, after the jump:

Pick up Kobold Quarterly #19 in print or in PDF, and we’ll see you in Tian Xia!