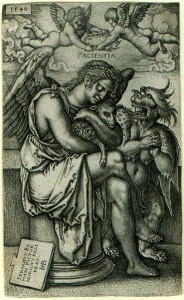 A manifestation of twisted freedom and self-devouring depravity taken to their most horrific ends, the Abyss contains virtually uncountable numbers of fiends, perhaps bordering upon the infinite. But while its labyrinthine depths swim, choked by its fecund natives, its resident demons are not the only creatures hungering for blood and slaughter for their own sake. The tale of Golarion’s Abyss begins in the prehistory of the cosmos, and indeed, the fiends now known as demons originated outside of its depths as a terrible experiment by the soul-devouring daemons of Abbadon—one which succeeded far beyond their capacity for control. Though the wayward children of the archdaemons remade the Abyss in their own image, they were not the first inhabitants, nor were their origins a unique occurrence.

The corners and dark places of the Abyss harbor many things. The list is legion and includes everything from colonies of rogue demodands; the creations of demon-lords like the incorporeal yix’an; unclassified terrors such as the parasitic synx; imprisoned or exiled spawn of evil gods; legacies of the plane’s first lords and those who would supplant or destroy it; and yet other failed successes of the archdaemons. However, of this catalog of horrors, three capture planar scholars’ attention most and the wary eye of others: the peacock spawn, the smoldering host of the Risen, and the children of malignant symmetry…

We are her children. She who fell from heights unimaginable. She who liberates. She who mocks. She who defiles the naïve. She who shall rise again like the resurgent light of an eclipsed star—hidden but raging—blinding those unworthy who behold its glory.
—Malizrek the Faceted Flame, peacock spawn

The peacock spawn are a race with no home, even among the uncounted layers of the Abyss. Perpetually wandering, they search for their mythical place of origin and the creator that blessed them with life and likewise condemned them to an agonized existence.

Appearing at first glance as idealized, statuesque humanoids, their hands and feet appear scorched and blackened by soot, with hooked, birdlike talons rather than conventional fingers and toes. Further deviating from the humanoid norm, their eyes lack a distinct pupil and swirl with color, like oil on water, and their hair shines like it was spun from burnished brass, bronze, or copper. And then there are the wings that sprout from their backs: not those of an angel or a demon, but guttering wings of flame roaring and moving like living things of their own, giving the peacock spawn the archetypal appearance of fallen celestials.

Among the creatures that wander the Abyss, the peacock spawn are an aberration. Unlike their Abyssal brethren, they don’t seem to belong, and sages often view them as exiles or migrants from some other plane transplanted into the Abyss. Being the source of such thinking, the very essence of the peacock spawn is such that they live in constant agony, pained and weakened by the very nature of the ground they walk upon, identical to the experience of archons, devils, or axiomites.

Lawful to an extreme, and as often neutral as evil, the mind boggles at how such beings originated within the depths of the heart of evil chaos, but that they did, and as disjointed as it might seem, on the rare occasion that they venture to other planes, attempts to banish them only return them to the Abyss. Clearly, something unique led to their creation and the circumstances that have them native to a plane that rejects them on a basic level.

Planar sages long suspected them to be abandoned creations of a long-vanished god or cruel creations of a particularly twisted Abyssal Lord, but the latter seems unlikely. Unlike demons, the peacock spawn have no connection to the souls of the dead. They reproduce among their own kind conventionally, but they do so only in order to maintain the population levels of their distinct tribes which wander the Abyss largely in isolation from one another. Abhorred by other natives of the Abyss, such breeding often follows a pattern of punctuated equilibrium, with periods of stability among the immortal creatures followed by rapid repopulation in the wake of bloody encounters with their abyssal fellows.