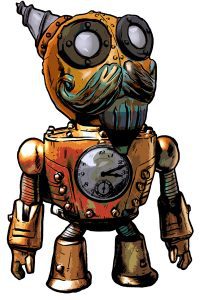 The folks over at Creature Daily have provided us with a sneak peek at something that’s due to show up on their site in May! Come take a look at the trigger gnome (who could resist taking a closer look at this guy?), and if you want to see more of their offerings, wander on over to the Creature Daily site!

The sound of whirling gears and grating metal can be heard as the figure of a gnome steps itself into view. Appearing as a life sized replica, complete with a large pointed hat and cheeky smile, this contraption is made of bronze plates riveted together with rusted bolts.

Self-Destruct (Su) Unless specifically programmed otherwise by its creator, a trigger gnome explodes 1 round after it is destroyed. During this round, a faint “hiss” can be heard, growing louder with each passing moment. On what would normally have been the trigger gnome’s next action, it explodes, dealing 1d6 points of fire and piercing damage in a 5-foot radius (Reflex DC 10 for half damage). A DC 20 Disable Device check made as a standard action can halt the trigger gnome’s self-destruct sequence, but does not prevent it from dying. As a full round action the gnome may choose to self destruct. This explosion is far more violent, causing 3d6 points of fire and piercing damage to a 10-foot radius. All creatures within the radius of this willed explosion must also make a DC 10 Fortitude save or be blinded for 1d4 rounds. The save DC is Constitution-based.

The trigger gnome is a mixture of a highly explosive trap, warning device, and deadly clockwork creature all combined beneath a smiling visage.

Upon activating, the sound of a loud grinding of gears can be heard coming from within their copper shells as they race toward unsuspecting targets.

Trigger gnomes have direct attack patterns programmed into them at the time of their creation. More aggressive than other standard clockwork creations, a trigger gnome that detects a target springs to life and then rushes toward them. When possible this clockwork positions itself between multiple targets, waiting until enough of them gather around it until it activates its self-destruct, exploding in a glorious ball of thundering flame and shrapnel. Built for the sole purpose of detonation, a trigger gnome will always give chase to fleeing enemies, stopping at nothing to fulfill its programmed duties to the best of its ability.

Although these creatures have very little in the way of physical attacks, those who build them have a variety of tricks used to boost their effectiveness. Some attach scrolls, parchments, or other trinkets to the creature’s form to inspire curiosity in targets, allowing the trigger gnome to take advantage of the time spent investigating it. Other devious combinations include covering the clockwork in adhesive. This dastardly tactic allows the trigger gnome to become stuck to the target of a successful slam attack and provides it ample time to explode.

These clockwork inventions are among the first designed for war. Taking the shape of a large shell casing ringed in copper plating, this weapon saw a great deal of use during the sieges of cities and well fortified towns. It was only later that the smiling image of a gnome was added by an obsessed inventor with a warped sense of humor. Typically found in pairs, these clockworks are the first defense found among the private grounds of wealthy nobles or eccentric wizards. The thundering echo emitted by the denotation of a trigger gnome is extremely loud and also serves as a warning signal to others, allowing any other guardians ample time to prepare for intruders.

While clockwork technology still remains rare among the common citizen, many wealthy and powerful nobles now openly fund the few guilds that specialize in their creation, allowing these guardian machines to be found waiting for intruders throughout the lands, servants to only those who can afford them.

These creatures are most times found as guardians.  Crafted to do the bidding of their creators and owners, they have seen use in a myriad of other nefarious ways. Assassins have long employed the use of variant trigger gnomes and other clockworks in many assassination plots.

We’ll take another peek at what Creature Daily has to offer next week! In the meantime, have fun devising ways to use this crafty little trigger gnome in your campaign.