Skip to content
Home / Delve into the Depths in the Kobold Blog / Expanding Codex: Bookkeeper 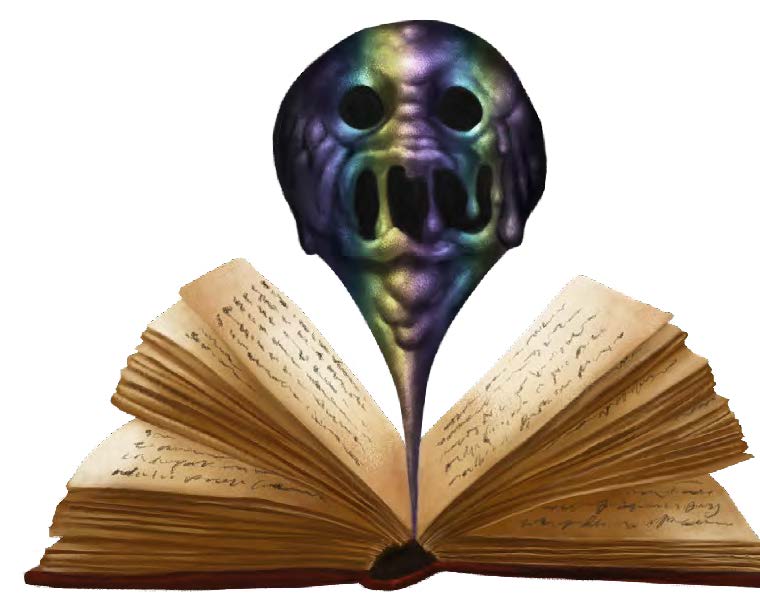 The following changes allow GMs to alter a bookkeeper without modifying its challenge rating.

Creator’s Mark. Melee Weapon Attack: +4 to hit, reach 5 ft., one target. Hit: the bookkeeper marks the target with an invisible rune, which it and its creator can see. The mark can be removed with a dispel magic or similar magic.

The bookkeeper loses its Bite action.

Dual Binding. The bookkeeper is attuned to two books rather than a single tome. It can use its Between the Lines trait to jump between books provided they are within range of each other. Its hp maximum reduction from its Book Bound trait only applies if it is farther than 60 feet from both books. Both books the bookkeeper are bound to are destroyed when it dies.

Stretching the bookkeeper’s magic across two books gives it the Antimagic Susceptibility trait.

Antimagic Susceptibility. The bookkeeper is incapacitated while in an area of an antimagic field. If targeted by dispel magic, the bookkeeper must succeed on a Constitution saving throw against the caster’s spell save DC or fall unconscious for 1 minute.

Nauseating Ink. Ranged Weapon Attack: +4 to hit, range 20 ft., one target Hit: 3 (1d6) poison damage, and the target must succeed on a DC 13 Constitution save or be poisoned until the end of its next turn.

Possess Reader (Recharges after a Long Rest). The fiendish bookkeeper treats its book as a container for a magic jar spell. It can possess a humanoid per the magic jar spell (save DC 9) if the humanoid moves within 60 feet of it. The bookkeeper can only possess a target for 10 minutes before it must return to its book. A DC 13 Wisdom (Perception) check notices ink flowing through the whites of the possessed creature’s eyes, and a DC 13 Intelligence (Arcana) check discovers the possession.

The fiendish bookkeeper loses its X Marks the Spot trait.

Spell Attunement (Recharge 4–6). The bookkeeper has access to a 1st-level spell within its book. Its spellcasting ability is Wisdom (spell save DC 9, +1 to hit with spell attacks). It can use an action to innately cast the spell, requiring no material components.

The following magic items and spell are inspired by abilities possessed by a bookkeeper.

This glass vessel looks like an ordinary inkpot. A quill fashioned from an ostrich feather accompanies the inkpot. You can use the vessel to contain a bookkeeper. A willing bookkeeper moves to the inkpot, but an unwilling specimen must succeed on a DC 13 Charisma saving throw or be transferred to the inkpot, making you the bookkeeper’s new “creator.” While the bookkeeper is contained within the vessel, it suffers no harm due to being away from its bound book, but it cannot use any of its abilities that apply to it being in a bound book. Dipping the quill in the inkpot and writing in a book binds the bookkeeper to the new book.

If the inkpot is found as treasure, there is a 50% chance it contains a bookkeeper. Variant inkpots work for inklings (see Creature Codex).

The bookkeeper records all things said within 60 feet of it. It can distinguish voices and notes those as it records. The book holds up to 12 hours’ worth of conversation. Any creature, other than you or targets you designate, that peruses the book finds the pages blank.

Ink shoots from your hand to a target. Make a ranged spell attack with the ink. On a hit, the target takes 1d6 poison damage and must succeed on a Dexterity saving throw or become blinded until the end of its next turn.