Skip to content
Home / Delve into the Depths in the Kobold Blog / Creature Codex: Alnaar (Demon) 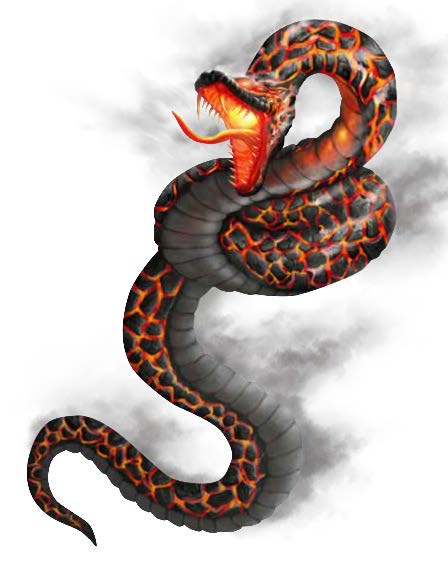 The creature resembles a great blackened asp with smoldering skin and white-hot serpentine eyes. It slithers as confidently through the air as across the ground.

Serpent of Suffering. Alnaar demons appear most commonly when a people, race, or species is experiencing suffering. There to hasten the process, the alnaar erupts from the Abyss, leaving massive holes in the firmament of the afflicted cities and towns. The alnaar’s only wish is to partake in the suffering of others, and it thrives on tormenting those already beset by tragedy. Disease, calamity, misfortune, and disaster are dinner bells to the alnaar.

Devourers. These demons have an insatiable appetite, and a single alnaar has been known to devour a cattle herd in minutes. Alnaar who have not eaten recently become weakened and desperate. Some evil warlocks make pacts with alnaar demons, offering piles of meat for service as guardians or assassins.

Demonic Mounts. When war rages across the Abyss, the great fiery serpents sometimes serve as mounts for powerful demons. A lord of the Abyss streaking through the skies atop the slithering alnaar terrorizes all but the most stalwart foe.

Skin of the Forge. A creature that starts its turn within 5 feet of the alnaar must make a DC 16 Constitution saving throw, taking 14 (4d6) fire damage on a failed save, or half as much damage on a successful one. A creature that touches the alnaar or hits it with a melee attack while within 5 feet of it takes 7 (2d6) fire damage. Nonmagical weapons and objects with Armor Class 15 or lower are immediately destroyed after coming into contact with the alnaar’s skin. Weapons that hit the alnaar deal their damage before being destroyed. This trait is suppressed if the alnaar is starving.

Flare (Recharge Special). The alnaar becomes super-heated, expelling momentous energy outwards in a 20-foot radius blast around it. Each creature caught in the blast must make a DC 17 Dexterity saving throw. On a failed save, a creature takes 22 (4d10) fire damage and 22 (4d10) force damage and is knocked prone. On a success, a creature takes half the fire and force damage but isn’t knocked prone. The fire ignites flammable objects that aren’t being worn or carried. After using Flare, the alnaar is starving. It can’t use Flare if it is starving.

On the Hunt. When a creature the alnaar can see moves, the alnaar can move up to 20 feet toward the moving creature. If the alnaar moves within 10 feet of that creature, it can make one fiery fangs attack against the creature.