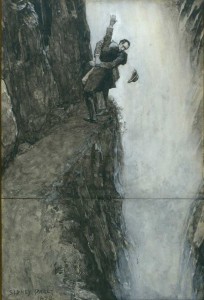 —Robert E. Howard, “The Phoenix on the Sword”

When it comes to roleplaying games (as with any engaging drama), conflict is king. An adventurer is nothing without the mountain impeding his path. And since the earliest days of D&D, the eponymous dungeons have been populated by creatures more foul than fair. From the lowliest dretch to the most legendary dragon, RPG enemies often derive their motivations from their ecologies. These ecologies are essentially the sandboxes our heroes are caught playing in from quest to quest. But things can get really interesting when intelligent adversaries enter the fray and endure throughout the ongoing narrative of your game.

No villain is created in a vacuum. They’re shaped by a world they strive to change with their own ill will. So the question is: how do we develop better villains for tabletop roleplaying? How to we keep intelligent enemies interesting—in and out of combat—without reducing them to caricatures or clichés? And what defines that archenemy who stands above them all? Part of the answer to these questions lies in the spiritual anatomy of our heroes. And, fortunately for us, there is a wealth of inspiration among the pages of pulpy adventure classics from the storytelling masters.

But let’s expand the discussion to include a few thrilling tales that predate our beloved pulps, particularly those of Sir Arthur Conan Doyle and a character considered by many to be the premiere supervillain: Professor James Moriarty.

“You stand in the way not merely of an individual, but of a mighty organisation, the full extent of which you, with all your cleverness, have been unable to realise. You must stand clear, Mr. Holmes, or be trodden underfoot.” —Professor James Moriarty, “The Final Problem”

There’s no denying that the Sherlock Holmes serials of Sir Arthur Conan Doyle were a critical influence on the emergence of the pulp fiction genre in the early 20th century. Holmes, with his uncanny wit and preternatural resolve, can be seen as a forerunner to the pulp detective heroes like Phillip Marlowe and Sam Spade. It’s only natural that Holmes’ greatest enemy would have been authored to engineer his demise.

Holmes himself considered Moriarty to be “the Napoleon of crime” and an antagonist of equally prodigious intelligence. James Moriarty was a man of “good birth and excellent education, endowed by nature with a phenomenal mathematical faculty.” But a “criminal strain” ran in his blood, and the diabolical tendencies of his progenitors were merely exacerbated by his own mental prowess.

Moriarty first appears in “The Final Problem,” penned by Arthur Conan Doyle in 1893, and makes his grand introduction by rather indirect means. After years of surreptitiously searching for a malefactor behind London’s syndicated criminal activity, Holmes has discovered the mastermind in question—one Professor James Moriarty—and sets about his destruction. But before we’ve even learned who Moriarty is, he’s made several attempts at Holmes’ life—courtesy of his network of underworld allies. The righteous pursuit of Professor Moriarty carries Holmes and Watson from the confines of London to the European continent, where inevitably the Professor lures Sherlock to his apparent demise at Reichenbach Falls.

From the perspective of a gamemaster, Moriarty quickly becomes an interesting case study for a compelling villain in your campaign. In many ways, he is quite like our heroic great detective—proudly intelligent and primally indefatigable. But while Holmes would rush headlong into confrontation (with or without the furtive benefits of one of his trademark disguises or the aid of ally John Watson), Moriarty is a puppet master who pulls the strings and has the dullards do the dirty work. Holmes sees the world as a problem worth solving; Moriarty views it from the vengeful eyes of the downtrodden.

The slow introduction of a supervillain is a sure-fire way to maintain a sense of mystery in your game. And the recurrence of a challenging yet relatable adversary can provide substance for your players as they further shape the motivations of their own characters throughout the campaign.

“Our methods have not differed as much as you pretend. I am but a shadowy reflection of you. It would take only a nudge to make you like me. To push you out of the light.” —Dr. René Belloq, Raiders of the Lost Ark

I believe it’s the familiarity Holmes senses in Moriarty that is most unsettling to him. It’s likely Sherlock sees a bit of himself in the Professor, a “what if” scenario that drove the great detective to the brink of sanity and self-awareness. Most importantly, Holmes fully understands the threat this nemesis poses to his world at 221B Baker Street and beyond. As the Professor so gravely warns our hero: “If you are clever enough to bring destruction upon me, rest assured that I shall do as much to you.”

2 thoughts on “Building a Better Nemesis”