Skip to content
Home / Delve into the Depths in the Kobold Blog / Tome of Beasts: Nihileth (Aboleth) 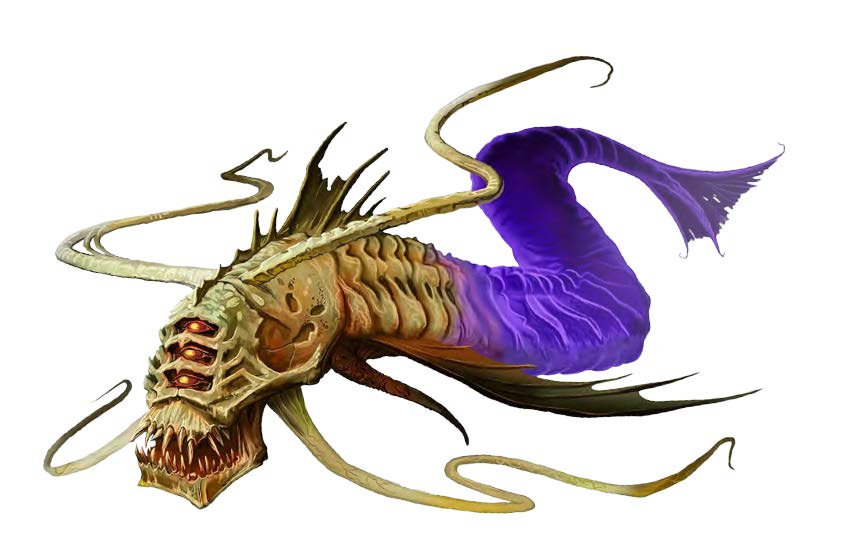 Eons ago, a group of aboleth left the Material Plane to wander through distant planes—seeing them through magical scrying was not enough, so these aboleth used astral magic and bodily travel to see far beyond normal realms.

A Forgotten Tribe. As ages passed, memories of those who departed slowly faded from the minds of those aboleth who remained behind. Those few aboleth who did remember that long ago some of their kin had gone plane-wandering assumed that the wanderers must have died in distant hells or paradises.

Changed by Planar Wandering. The plane-wanderers hadn’t died. Instead, their eons-long exposure to alien realms and to the space between changed them, restructuring their life force and making them into something even more nightmarish—but better able to withstand both strange hells and golden realms of eldritch delight.

Servants of the Void. They returned even more corrupt and powerful than they had left, and these wandering nihileths returned to the mortal world intent on spreading the influence of the Void and the utter evil they found in the vast darkness between worlds.

Undead Nature. A nihileth does not require air, food, drink, or sleep.

Undead Fortitude. If damage reduces the nihileth to 0 hit points, it must make a Constitution saving throw with a DC of 5 + the damage taken, unless the damage is radiant or from a critical hit. On a success, the nihileth drops to 1 hit point instead.

Dual State. A nihileth exists upon the Material Plane in one of two forms and can switch between them at will. In its material form, it has resistance to damage from nonmagical weapons. In its ethereal form, it is immune to damage from nonmagical weapons. The creature’s ethereal form appears as a dark purple outline of its material form, with a blackish-purple haze within. A nihileth in ethereal form can move through air as though it were water, with a fly speed of 40 feet.

Infecting Telepathy. If a creature communicates telepathically with the nihileth, or uses a psychic attack against it, the nihileth can spread its disease to the creature. The creature must succeed on a DC 14 Wisdom save or become infected with the same disease caused by the nihileth’s tentacle attack.

Multiattack: The nihileth makes three tentacle attacks or three withering touches, depending on what form it is in.

Tentacle (Material Form Only): Melee Weapon Attack: +9 to hit, reach 10 ft., one target. Hit: 12 (2d6 + 5) bludgeoning damage. If the target creature is hit, it must make a successful DC 14 Constitution saving throw or become diseased. The disease has no effect for 1 minute; during that time, it can be removed by lesser restoration or comparable magic. After 1 minute, the diseased creature’s skin becomes translucent and slimy. The creature cannot regain hit points unless it is entirely underwater, and the disease can only be removed by heal or comparable magic. Unless the creature is fully submerged or frequently doused with water, it takes 6 (1d12) acid damage every 10 minutes. If a creature dies while diseased, it rises in 1d6 rounds as a nihilethic zombie. This zombie is permanently dominated by the nihileth.

Form Swap: As a bonus action, the nihileth can alter between its material and ethereal forms at will.

Void Body: The nihileth can reduce the damage it takes from a single source to 0. Radiant damage can only be reduced by half.

While aboleths create their lairs underwater, spending most of their time submerged, a nihileth lair can be encountered out of the water, often in a cave or a ruined, abandoned city.

On initiative count 20 (losing initiative ties), the nihileth can take a lair action to create one of the magical effects as per an aboleth, or the void absorbance action listed below. The nihileth cannot use the same effect two rounds in a row.

The regional effects of a nihileth’s lair are the same as that of an aboleth, except as following.