Skip to content
Home / Delve into the Depths in the Kobold Blog / Dungeons of Midgard: Excavation of the River Dragon

In the underground depths—roughly below the region around Smoltenberg—deeper even than the mines dug out by dwarves, there is abandoned trading outpost beside an underground river, a far-reaching tributary of the Blackjet River.

Once, not so long ago, this place served as the home for a prosperous community of dark elves. They called it Cornnaith.

The walls of the main thoroughfare feature carvings and statuary venerating Silistryn, the spider queen goddess. Throughout the community, floor tiles and ceilings are engraved with a spiderweb motif of silver filigree. Sconces and candelabras, furniture hardware, and even carvings on doors and archways, all feature the eight-legged arachnids in either abstract or lifelike design.

The dark elves in this region were all but eradicated, however, when the ghoul empire took vengeance on the children of the spider queen. Communities such as this were abandoned as their inhabitants fled in panic into the twisting caverns or rushed to the aid of their kin defending their capital city. Because this outpost is located south and west beyond what the ghouls consider their territory, however, it has stood undisturbed in the intervening decades.

Until now, that is.

Industry of a macabre and cruel nature is being undertaken by a company of ghouls. Trevkos Barrowwright, a transformed human darakhul (Tome of Beasts) known as the “Fossil King,” is an expert in digging and excavating. Trevkos’ “family” of ghoul assistants are often dispatched to locations in the subterranean darkness, tasked with unearthing the fossilized remains of creatures of immense size. When seeking siege-busting behemoths, the empire’s preferred method is capturing and transforming cave dragons. But Trevkos considers digging up bones a less risky proposition. Once a skeleton is unearthed, it can be animated and weaponized.

Trevkos received a commission arranged by a particularly ambitious darakhul, Lieutenant Elvoss Corpsecandle. A transformed dark elf, Corpsecandle remembered that the exposed bones of a gargantuan “river dragon” were considered something of an attraction for visitors to the outpost at Corrnaith.

What Trevkos found more than fit the bill: the skeleton of a spinosaurus (Tome of Beasts). Thus began the fine work of removing the fossilized bones from the surrounding rock without damaging them. He also started a secondary excavation in an adjacent chamber hoping to discover another similar set of remains.

Trevkos prefers the use of slave labor in his excavations. Ghoul laborers are tireless, but they are less exacting and much harder to control than even recently captured and rebellious slaves. Knowing that Smoltenberg mines were in the vicinity overhead, Trevkos captured dwarven mining teams especially suited to his task.

Hook: Player characters might be drawn to investigate the disappearance of dwarven mining teams or they themselves are following clues and maps to the ruins of Cornnaith in a quest for its rumored riches. A powerful scrying wizard who monitors against darakhul incursions on behalf of Smoltenberg’s Magdar masters might assign adventurers to the task if she detects movement by ghouls beyond the boundaries of their territory.

Guard posts: Wikrul, an iron ghoul (Tome of Beasts), serves as Treskus’ lieutenant. His main task is to direct and maintain the troops. The guards are restless, hungry and hard to control. There are two ghouls and a ghast in each of the indicated guard posts.

Excavation chamber. The dwarf slaves work in two shifts of teams of five, each under the watchful gaze of two imperial ghouls (Tome of Beasts). Slaves are marched from the slave pits through the shallows of the river and across the lagoon to the work site.

Slave pits: Where dwarven miners, all commoners, are kept when they are not tasked with the slow excavation. At any time there should be 10 miners resting. Two imperial ghouls guard the slave pits. Spakkle Keen, a veteran, is the dwarf mining boss, who is kept as a hostage in one of the three cells (determine randomly, DC 10 Dexterity to disable lock). He is moved daily so as to disorient him and to discourage escape or rescue.

Toxic lagoon: The waters in the lagoon have become polluted from a brew of ghouls, ghasts, and toxic minerals from the excavations. Treat as a contact poison (DC 10 Constitution saving throw. Failure results in 1d12 poison damage and the subject is poisoned for 24 hours. On a successful save, take half damage and subject is not poisoned).

Barrowwright Quarters: Trevkos’ “family” resides here, a social group that aids in his work and provides a social structure to his existence. By taking his name they are all under his protection.

Trevkos keeps the family treasure, a chest containing coins worth 200 pp and a dozen gems each worth 200 gp, behind a secret door in another section of the complex. He only trusts Vikara with its location.

Workshops and Tool repair: Two ghouls in each chamber work at repairing tools.

Part 2: Revenge of the Spider Queen

Trespassing into the holiest of holies of the spider queen will provoke a reaction that will place both the adventurers and the ghoul expedition in peril.

(Even though Trevkos has made his headquarters in the chamber outside the passage into the chapel, he has had neither inclination nor opportunity to investigate. He is completely focused on the excavation.)

Chapel: Has a secret door (DC 15 Wisdom/Perception) that activates a deadly trap (DC 20 Dexterity to disable trap) in the adjoining chamber of pillars.

Chamber of Pillars: The secret doors slide shut (DC 15 Wisdom/Perception to reopen from the inside) once one of the PCs reaches the center row of pillars in the chamber. Unless the trap is disabled, six spider thief (Tome of Beasts) constructs then descend from the ceilings on wires and begin their attack, creating dangerous razor lines between the pillars. There is a secret door (DC 15 Wisdom/Perception) to the next room, the vault. It also activates a deadly challenge, though a divine one. 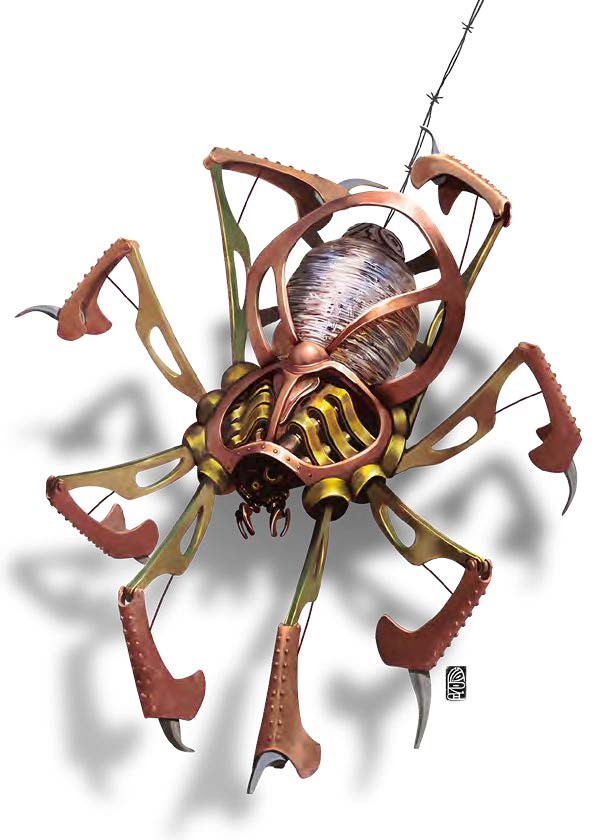 Vault: Breaching this room, adorned with a wall-sized depiction of the spider queen, violates the divine protections placed on it. Breaking the seal on the room without disabling the trap (DC 20 Dexterity or Intelligence/Religion) sends forth a pulse of divine energy. The response is not instantaneous, but could be dire for anyone who lingers. It prompts a cascading response, summoning ever-more massive arachnids to protect the vault. Any characters who remain in the area of the map from this point forward will encounter spiders in whatever area their turn begins in (see table, below).

Presume the spiders are moving by natural means into encounter areas, though previously undetected, skittering quickly along in the dark, along walls and ceilings.

The exception to this is as when sequence begins with a phase spider materializing from an ethereal existence to defend the vault’s most precious treasures:

Treasure: A wand of web and eight small treasure chests. The wand has the following additional properties: used in sunlight it might disintegrate (roll a d20 on an attempted use, on a 1 it crumbles to ash) and it causes a flash of pain to any first-time wielder (equal to 1 hp of damage). Each chest contains 500 silver pieces, each coin stamped with an eight-sided star on heads and an hourglass on tails.

Simultaneously, all the other inhabitants of the complex, ghouls and slaves included, are under attack, too.

It is up to the GM to decide whether the spiders in any given encounter will give chase, continue to attack or will disengage so as to continue moving toward the vault.

Troy E. Taylor writes about dungeon mastering for GnomeStew and his blog TheDungeon Delver. He lives in central Illinois with his wife, a motorcycle-riding librarian, and their three children.

2 thoughts on “Dungeons of Midgard: Excavation of the River Dragon”