Skip to content
Home / Delve into the Depths in the Kobold Blog / The Faces of Rage: Adding Character to Barbarians 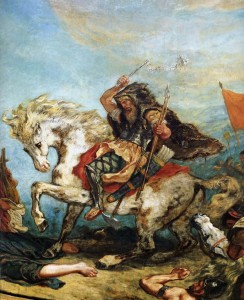 I don’t always play barbarians, but when I do, I prefer huge, hulking characters with terrifying battle cries and a frenzied look in their eyes. Anyone who has ever sat at a table with a barbarian has likely noticed, though, that they’re sort of a one-trick pony: it’s all about the Rage, capital “R.” And why not? It boosts your Strength and Constitution scores, gives you bonus hit points and increases your resistance to mental control, all for a paltry Armor Class penalty. That’s not the problem . . . the problem is that just by calling the ability Rage, it gives players a prejudiced view of what happens when the ability is activated, and that can lead to stagnant character concepts. But if you change up the flavor, then your barbarians can each become unique.

What am I talking about? Isn’t Rage just a mechanical representation of the killing frenzy that only the less civilized can truly harness? Sure, if that’s how you want to play it out, but that doesn’t have to be the only explanation for it.

As a “for instance,” you could play a young barbarian who comes from a tribe that worships and feels a connection to his or her ancestors. Perhaps Rage represents a connection to your barbarian’s parents, grandparents, and the warriors that came before. You could show this by changing the weapon your barbarian fights with when raging, changing the way the barbarian fights, or even altering the tone of voice and manner of speech to sound more archaic. Alternatively, you might be playing a barbarian that treats combat like a sport. Rage could represent when your barbarian stops laughing and decides that it’s time to go to sudden death, making it a representation of the character’s true ferocity when your barbarian decides to give his or her all to a fight.

There’s an endless variety of ways that you can spin Rage to make your barbarian more memorable. Maybe, rather than shouting a battle cry, your barbarian fights in complete silence and with no emotion at all. By combining that with feats such as Die Hard or Orc Ferocity (found in the Pathfinder game), you’ve created a mystique for a barbarian that will make other players wonder why he or she fights that way, along with giving them a signal that your barbarian’s rage has begun. Maybe you have a barbarian who is an alcoholic or who’s addicted to alchemical performance enhancers, and he or she can’t use Rage without that stimulation. Perhaps the potion itself is the trigger, like the sacred herbs that some legends state that the Viking berserker was supposed to eat.

It’s sort of like the personas that professional wrestlers come up with; sure they’re all huge, strong, and tough, but it’s their flavor and their signature styles that make them good or bad, and that can make them memorable or forgettable. Once you know what Rage is to your character, you can then choose appropriate weapons, triggers, skills, and feats to best build off the story that you’re creating. If you do that, there’s a chance that your barbarian might just become one of the most memorable characters in the party.

10 thoughts on “The Faces of Rage: Adding Character to Barbarians”