Skip to content
Home / Delve into the Depths in the Kobold Blog / Shades of Magic: Eyes of the Dragon 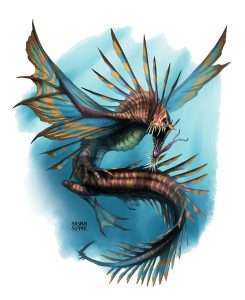 Dragons are known to have a deep connection with magic. Those who seek to understand or emulate this connection study such monsters as others that fear their power or hate their ways incant spell and raise sword in opposition. Some seek to tap the dragon’s well of magic, collecting their body parts, while others deify the wyrms, believing them vessels of cosmic alignment or embodiments of godly might, thereby pursuing their own hunger for knowledge and universal insights in the presence of these cunning, ancient reptiles.

This blade was forged from a piece of a scale found when Veles bit into its own tail. The spear’s original forger is unknown, but its destructive force is clear: kingdoms fall at the stroke of this weapon, making it both feared and coveted. The spear is held close by the gods but always seems to appear—miraculously stolen and found in the hands of a mortal—during times of great change. Laevateinn’s blade is a dark brown, almost pitch-black, and the blade’s rough, scaled surface seems to expand and contract as if still upon a breathing dragon. The spear’s pommel is made from gold with three black talons that hold a clear gemstone eye with a pulsing red center. The center of the hilt is a second gemstone that holds a bluish-white liquid which circles in a discernible whirlpool. The shaft is made from a twig of Yggdrasil with light brown wood that has twinkling stars within the shaft’s grain.

You have a +2 to attack and damage rolls with the magical spear. In addition, when you deal damage with this weapon, you deal an additional 1d6 force damage.

Door to Death: On your turn, you can use a bonus action to allow the blade to take control by channeling your desires. You gain temporary hit points equal to your level and then gain 2 of the following effects:

At the start of each subsequent turn you are channeling your desires, you take 2d6 psychic damage. You can end your channeling as a bonus action on your turn unless you channel Insanity. Once you use this feature, you cannot use it again until you complete a long rest.
Sentience. Laevateinn is a sentient chaotic neutral weapon with an Intelligence of 12, a Wisdom of 14, and a Charisma of 14. It has darkvision out to a range of 120 feet. The weapon communicates telepathically with its wielder and can speak common. It frequently desires to be soaked in some form of destruction. Whilst attuned to the spear, it can understand every language you can.
Personality. Laevateinn speaks in short sentences, often singular action phrases. It desires to be great and to be heralded as a being of strength. Sometimes it speaks about its creation and the gods who tampered with it. 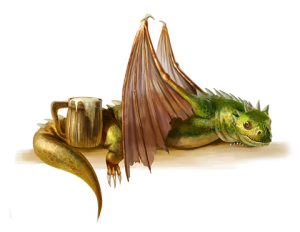 Legends tell of a dragon whose hide was impenetrable and so tenacious that only a blow to the heart would kill it and an unnamed hero defeated it and tore its heart into two. The dragon’s name was lost but its legacy remains. The amulet is one of two pieces that were crafted to hold its heart. An intricate engraving of a warrior’s sword piercing a dragon’s chest is detailed along the front of the untarnished silver locket. Within the locket is a clear crystal vial with a pulsing piece of a dragon’s heart. The pulses become more frequent when the wearer is close to death.

Attuning to the locket requires the wearer to mix their blood with the blood within the vial. The vial holds three charges of dragon blood that are passively consumed upon reaching certain health thresholds. Dragon blood charges are regained when slaying any dragonkin and draining their heart’s blood into the vial. Attuned wearers gain the following effects:

This throwing star (shuriken) was crafted by the monk Phidjetz, a martial recluse obsessed with dragons. The spinner consists of a golden central disk with four metallic dragon heads protruding symmetrically from its center point. The first dragon head is red; the second: white; the third: blue; and, the fourth: black.

The attuned thrower spins the disk with a pinch grip on its center. Balancing it as it spins (dexterity check, the thrower then chooses a single target and rolls to hit at +2. Phidjetz Spinner then flies at the chosen target. These actions count as 1 attack and use no ki points.

Once airborne, Phidjetz Spinner’s red dragon head emits a torch of orange flame; the white one: a blade of blue ice; the blue head: a short bolt of dancing electricity; and, the black one: a tongue of solid greenish acid. After an attack, Phidjetz Spinner flies back to its attuned thrower and is automatically caught/retrieved.

Crafted by a skilled wizard and meant to be a spellcaster’s last defense, this staff is five feet tall, made of yew wood that curves at its top, is iron shod at its mid-section, and capped with a silver dragon’s claw that holds a lustrous, though rough and uneven black pearl.

The staff can be wielded as a magic quarterstaff that grants +1 to attack and damage rolls, and has 4 charges. The staff regains charges at dawn, or when the pearl is exposed to direct moonlight for 1 turn.

When used as a weapon, the staff hauntingly howls and whistles like the wind. When its spells are employed, the staff chirps like insects on a hot summer night. 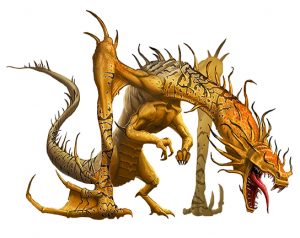 Legends tell of a dragon whose hide was impenetrable and so robust that only a blow to the heart would kill it. The legend concludes that an unnamed hero defeated it and tore its heart into two. Though the dragon’s name was lost, its legacy remains. This sword was one of two items that were crafted to hold its heart. The Sword of Volsung’s blade is black and adorned by glittering silver runes, while its guard has a shallow opening at the center and grooves connect it to the first rune. The sword’s pommel is a large clear crystal held fast by silver scales.

You have +2 to attack and damage rolls when wielding this magical sword, you deal damage with this weapon to dragonkin, you deal an addition 1d4 of slashing damage. Attuned wearers gain the following effects:

This metal shield has an outer coating consisting of hardened shellac (resinous insectoid secretions dissolved in alcohol) embedded with flakes from ground dragon scales collected from various living dragon wyrmlings and one dracolich (information on the undead dragon’s type was lost when the records at the Library of Mux were lost in an all-consuming fire). When artificial or natural light hits Graddfyedd Ddraig, the shield reflects prismatic colors. This shield is considered heavy (large and cumbersome) and requires a minimum Str 16 to wield it. (Consult with your GM for gp value if this shield is to be sold.)

While holding this shield, you have a +2 (+3 vs. dracolichs) bonus to AC, you are resistant to acid, cold, electrical and fire damage imparted by a dracolich’s life drain as well as draconian breath weapons. (Consult with your GM: this could mean damage severity is reduced, such as from deadly to dangerous, if the PC is surprised and only partially covered by the shield or if resistance imparts a saving throw advantage, such as when engaged with an especially powerful dragon, or that the shield offers total resistance, such as if the PC crouches behind the shield while within the cone of a dragon’s breath weapon, or if the draconian foe is younger/smaller.)

When sufficient light is available (consult with your GM: this could mean torch or sunlight), the shield’s dragon scale flakes have reflective qualities which create the following effect during melee, regardless of the opponent:

3 thoughts on “Shades of Magic: Eyes of the Dragon”