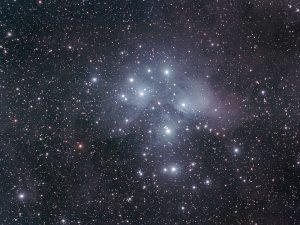 Despite their powerful magical abilities and natural aptitudes for spellcasting, living stars that choose to interact with other beings typically relish the visceral rush of melee combat and frequently have a weapon of choice with which they are highly expert. While most wield potent magic weapons from points around the Celestial Sea, a lucky few possess miraculous armaments forged by one of their fellow stars.

Barely visible in Midgard’s night sky, Akaya is among the foremost of the star smiths. Standing 9 ft. tall, she appears to be forged entirely from obsidian, and her eyes crackle with flame. Lacking a furnace or any tools to speak of, most of Akaya’s masterpieces are literally handmade, forged using her hellacious starfire and powerful fists.

Most are in the hands of other stars or powerful agents of Rava (with whom she maintains a friendly relationship), but the centuries have seen a number of Akaya’s creations turn up in unexpected places across Midgard. Though some were simply lost by their original owners, Akaya occasionally requires assistance obtaining especially rare raw materials and has been known to offer modest pieces in payment.

The items that follow are but a few of these treasures. As living stars are mythic beings in every sense of the word, Akaya’s already-formidable weapons typically possess even greater powers for mythic users to unlock.

Following a successful attack with these +3 vorpal brass knuckles, a wielder can expend one use of mythic power to conjure a giant, glowing brass fist that continues in the path of the original attack until it encounters another target or obstacle. Upon encountering a new target, the wielder should make a new melee attack but use the original damage roll. If the fist’s second attack is against an object rather an opponent, double the original damage roll.

Belt of the Phantom Stampede

Crafted from sparkling black leather and decorated with generous amounts of gold and mithral, this belt of bull’s strength allows a wearer to move directly through squares occupied by allies during a charge attack. A charging wearer can also expend one use of mythic power to avoid provoking any attacks of opportunity, move through up to 2 squares occupied by a single opponent or obstacle (without provoking an attack of opportunity), or move through up to 4 contiguous squares of difficult terrain with no penalty. The wearer must finish the charge in an unoccupied square.

This +3 full plate armor is an object of seemingly impossible craftsmanship, constructed from strange alien metals combined in swirls of color as if they were paint on a page. When the wearer of this armor is successfully hit by a sneak attack or critical hit, he or she may expend one use of mythic power to target the attacker with a blast of radiance as an attack of opportunity (even if the wearer has used all attacks of opportunity for the round). The target is blinded and takes 9d6 damage. A DC 24 Reflex save halves the damage and negates the blindness. Undead specifically harmed by bright light are destroyed in the event of a failed save.

To read the earlier entries in this series, you can go to Part I, Part II, Part III, and Part IV.