Skip to content
Home / Delve into the Depths in the Kobold Blog / Prepared!: Atop the Mountain 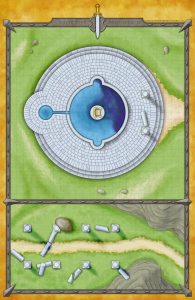 She lay down her sword and wept; her tears are the water.

She lay down her body and slept; her bones are the fountain.

Atop the mountain, at the war’s end, a place for gods to wonder.

“Atop the Mountain” is an explorable fifth edition location designed to offer a hard challenge to four 11th-level characters.

A planetar rests at the top of a mountain. A veteran of an ancient war against the hells, and a champion to a god long forgotten, this planetar has been transformed by sleep into a radiant fountain. The fountain now serves as a place of reflection for good-aligned clerics. One such cleric has returned from the mountain with an unsettling tale: the fountain’s waters are spoiling, and strange magics hover visibly near the holy place. In truth, a host of devils plot to corrupt the fountain and claim the planetar as a servant of an unnamed devil lord. Arriving atop the mountain, the party must battle through crumbling pillars, repel the devilish corruption, and prevent the planetar’s dark awakening.

The chain devil in area 2 is performing a ritual which, if completed, awakens the planetar as a corrupted and evil being. Left unassailed, the chain devil completes the ritual in 5 rounds. Engaging the chain devil in melee results in her abandoning the ritual for the duration of the combat; she joins her companions in attacking the PCs. If the ritual is completed, a planetar appears above the fountain; after 2 rounds, its coloration changes to a deep crimson and it attacks the party; it does not pursue if they retreat.

The fountain is actually a potent weapon that can be used to battle the invading devils. Any spellcaster within 60 ft. of the seat recognizes it is magical. Any good-aligned PC may sit in the throne-like seat and attempt to use its magic. Understanding the powers of the fountain requires a DC 12 Intelligence (Arcana or Investigation). Divine spellcasters receive advantage on this roll. Using a power requires an action. The fountain can be used to do the following:

Holy Motes. The seat casts magic missile as a 12th-level spellcaster (12 darts). The missiles cause radiant damage. The occupant of the seat chooses the targets.

Repel Evil. (recharge 5 – 6) All evil-aligned creatures under 10 HD are instantly moved to the perimeter of the fountain’s flagstones. Affected creatures move in the straightest path possible; a DC 12 Dexterity saving throw is required to avoid falling prone at the end of the forced movement.

Area 1: Columns in the Wind

The trail passes between two rows of fallen columns. A stone tablet has fallen from its place atop one of the columns; its face appears vandalized. A cold wind blows through the ruined approach; with it comes a faint dark whispering.

Hiding in the toppled columns are 2 barbed devils. They attempt to ambush the party, and attack from different directions once the PCs are between the column rows. “She will serve and all will serve,” is scratched crudely into the tablet in the infernal tongue. A DC 10 Wisdom (Perception) check on the tablet reveals it bears some strange features reminiscent of scribed scrolls. Any spellcaster may attempt to read the tablet with a DC 14 Intelligence (Arcana or Religion) check. Reading the tablet restores 10 hit points all good-aligned PCs within 20 ft. If the reader is a good-aligned divine spellcaster, the affected PCs also gain the benefits of taking a long rest.

A DC 12 Wisdom (Perception) check while searching the area uncovers several traveler packs abandoned among the columns. The packs contain a quiver (12) of +2 arrows, 2 potions of supreme healing, and a small pouch containing 300 gp worth of finely cut rubies.

Area 2: Fountain of the Planetar

Climbing the final short ascent, you see a great stone fountain standing at the highest point of the mountaintop clearing. Flagstones set in a circular pattern surround the large basin, and you see a throne-like seat mounted on a pedestal at the fountain’s center. A small host of devilish figures cavort in the basin; the water near them darkens.

The contingent of devils consist of 4 spined devils, 2 bearded devils, and 1 chain devil. They grin at the PCs as they approach the fountain. The chain devil attempts to corrupt the fountain as previously described. The remaining devils attack the PCs. The bearded devils actively try to block the PCs’ movement toward the chain devil. The spined devils stay at range and focus their tail spine attacks at PCs attempting to use the Seat of the Planetar. While interrupting the devil’s ritual does end the threat of the planetar awakening and attacking, it does not remove the brackish spoiling of the water. A heal or greater restoration spell restores the water entirely. Good-aligned divine spellcasters may also restore the water by succeeding a DC 18 Wisdom (Medicine) check. Restoring the water casts a boon on the PCs; they receive advantage on all attacks against chaotic evil opponents of 10 HD or more for 24 hours.

7 thoughts on “Prepared!: Atop the Mountain”