Skip to content
Home / Delve into the Depths in the Kobold Blog / Steely Gaze and Lethal Blows: Pulp Combat 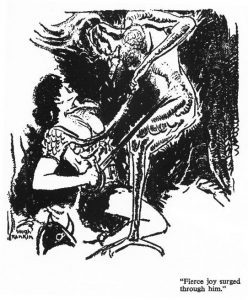 “The Cimmerian laid his hand on his sword hilt, and the gesture was as fraught with menace as the lifting of a tiger’s lip to bare his fangs.” ­ — Robert E. Howard, “The God In The Bowl”

When it comes to the art of swordplay in literature, none have captured it with the electrifying style and thrilling wit of Robert E. Howard, ­ creator of Conan the Cimmerian, Kull of Atlantis, Solomon Kane, and many other quintessential heroes of the pulp era. Indeed, grandmaster Stephen King said of Howard’s abilities in his non­fiction essay Danse Macabre, “In his best work, Howard’s writing seems so highly charged with energy that it nearly gives off sparks.” I recall my first meetings with Conan and his contemporaries with a special kind of reverence. Lovecraft was the gatekeeper, along with Scott Gray,­ a dear friend and gaming mentor ­who’d recommended I investigate Howard’s Cthulhu Mythos fiction. Suddenly my young mind was immersed in weird worlds of Nameless Cults and Hyborian Kingdoms. And the De Laurentiis films with which I was familiar took on new meanings once I was able to decipher those hallowed origins. The spectacle of cinema (albeit home video) only reinforced the verisimilitude of Howard’s writing.

Despite the visceral and violent nature of these tales, Howard’s craft proves there’s more to combat than the tawdry clash of steel. Unparalleled dramatic tension lurks in those moments before the deadly lunge; and silver­tongued swordsmen turn the tides of war with sharpened words. Every battlefield becomes a stage of the spectacular during that “Age undreamed of, when shining kingdoms lay spread across the world like blue mantles beneath the stars.” It’s only fitting, then, that we look to Howard’s prose for inspiration when it comes to combat in Pathfinder and D&D. And instead of focusing on raw mechanics, let’s examine a few tropes from Howard’s stories and the cinema they inspired.

Training Montage—Secrets of the Sword Masters

“You see? Fencing and fighting are two different things. And you need to learn them both.” ­ —Red Sonja to Prince Tarn, RED SONJA (1985)

Combat Feats are the cornerstones of a warrior’s arsenal. They help shape a character’s fighting style and represent the acumen only hard-­won survival can supply. As you customize feats, skills, and extraordinary abilities for your character, keep in mind the wellspring of your PC’s newfound knowledge. Was this training “in the field” or was there a mentor who took you under their wing?

Gamemasters can facilitate this forward thinking by providing functional NPCs that serve as trainers, paid or otherwise. Who among us can forget the measured words of Mako in Conan the Barbarian as he narrates the Cimmerian’s coming of age? “In time, his victories could not easily be counted… he was taken to the east, a great prize, where the war masters would teach him the deepest secrets.” For many of us, these secrets are essentially what happens in between game sessions. Try pushing those otherwise petty moments into the limelight and you’ll see a kind of world­building emerge where your PCs have storied  points of reference for their combat prowess.

In short, with a little effort and a lot of love for the pulp classics, PC advancement no longer has to feel like homework. Viewing these relatively mundane mechanics through a pulp storytelling lens allows us to obfuscate the logistics while enhancing the dramatic rewards.

“What daring! What outrageousness! What insolence! What arrogance! … I salute you.” ­ King Osric to Conan, CONAN THE BARBARIAN (1982)

Once you’ve mastered your sword arm, it’s time to harness the harrowing wit of Howard’s finest heroes. The lash of Conan’s words were often as biting as his blade; and Solomon Kane was prolifically renowned for his prosaic admonition and acerbic stare. This trope of the proud and self-­assured protagonist transcends the pulp genre and has become a staple of modern action cinema, including more than a few adventure yarns starring fan­-favorite Arnold Schwarzenegger. And although Conan didn’t have his own catchphrase, his forerunner Kull did: “By this axe I rule!” became a calling card for the Atlantean conqueror. But when I consider the most classic of trash-­talking showdowns, the dual between the titular she­-devil-­with­-a­-sword  and Lord Brytag in Richard Fleischer’s Red Sonja always climbs to the top of my list—it’s a non­stop battle of jibes and is the high-water mark for tête-­à-­tête in the Howard tradition.

In this spirit, I thought I’d offer up a shortlist of favorite taunts from Howard’s pulp stories and their subsidiary films. Give your Intimidation checks the gravitas they deserve and send every enemy to their grave with the grim satisfaction you desire…

Whether you borrow from the masters or develop your own, a stockpile of taunts and taglines is a must-­have for any pulp-­worthy PC. GMs should allow character motivations to shape the story; if players make inspired choices through dialogue, don’t be too quick to let dice get in the way of the drama and spoil an otherwise spectacular outcome. And never hesitate to reward a job well done.

It’s no secret I’m partial to the latter half of the sword & sorcery genre, but let’s face it ­ even the most delicate mage will find a dagger in his hand when melee calls. Battle is in the blood of every adventurer, whether they heed its passionate whims or not. Now, take up your sword and watch the skies…